Review: Just Like Heaven - A Tribute To The Cure (Various Artists) 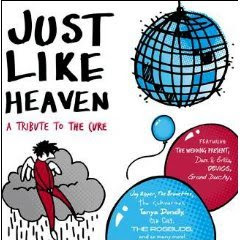 Various Artists – Just Like Heaven: A Tribute To The Cure
2009, American Laundromat Records

American Laundromat Records presents a paean to one of the most influential British bands on the 1980s and 1990s, The Cure, entitled Just Like Heaven: A Tribute To The Cure. Featuring some very well known names in Indie Music, Just Like Heaven covers the best of The Cure. Like most tribute albums it’s a mix of brilliant covers and reinterpretations with some unfortunate matches of song and artist, but on the whole it is very well done.

Joy Zipper opens things up with Just Like Heaven in a reverential version that doesn’t stray far from the original. Tanya Donelly & Dylan In The Movies pair up for The Lovecats. Donelly is in fine vocal form here and Dylan In The Movies vocalist Brian Sullivan has one of the more distinctive voices in Rock N Roll, falling somewhere between Brad Roberts (Crash Test Dummies) and Tom Waits. L.A.’s Kitty Carlyle provides a sharp rendition of In Between Days with stellar lead vocals. Dean & Britta’s cover of Friday I’m In Love sounds like an unfortunate match. The song ends up sounding a bit like elevator music, giving up all of the joy that ran through the original. The vocalists here are competent, but just don’t have the range for this particular arrangement.

One of my two favorite songs on the disc is Luff’s cover of Jumping Someone Else’s Train. It’s a dark and moody interpretation full of sonic dissonance (particularly in the guitar). The Submarines falter on Boys Don’t Cry, offering a sonically okay but relatively lifeless reading. My other favorite is Elizabeth Harper & The Matinee’s rendition of Picture Of You. It starts with Harper’s voice which is absolutely gorgeous, but the vibrancy of this recording is undeniable. It might even be better than the original. Cassettes Won’t Listen chip in with a very peppy version of Let’s Go To Bed that’s a fun listen and makes me want to run out and see what else they’ve recorded. The album also includes covers by The Brunettes, Devics, Julie Peel, The Poems, Grand Duchy and The Wedding Present (High, at warp speed).

Just Like Heaven: A Tribute To The Cure is a strong set of covers that run the range from incredible to forgettable. Elizabeth Harper & The Matinee and Luff are particular finds, and Tanya Donelly, Joy Zipper and The Wedding Present can always be counted on for great performances. Cure fans will love this.

You can learn more about the compilation Just Like Heaven: A Tribute To The Cure at www.myspace.com/atributetothecure or http://www.alr-music.com/, where you can purchase a copy of Just Like Heaven. You can also pick it up at Amazon.com or as a download through iTunes.
Posted by Wildy at 5:10 AM