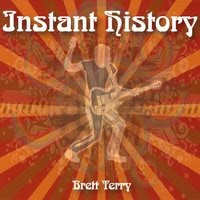 Today we have a treat for you. Some of you are familiar with Canadian alt-country legends Blue Rodeo, and all of you at least know who The Beatles are; well imagine the two bands played and wrote together. Somewhere in there you'd start to hear something like Mystic, Connecticut's Brett Terry. Terry's sophomore album, Instant History, is a hyper-enjoyable mix of Pop/Americana that will appeal to fans of The Beatles, Blue Rodeo, Wilco, The Skydiggers/Cash Brothers, and Ryan Adams (among others).

Instant History opens with Alexander Street, an Southern Rock styled anthem for a place where folks wait for the world to change without ever taking initiative. Unharmed has a wonderful lullaby quality to it, fleshed out with jangly guitar and some nice vocal harmony work. Rock Star is a bit of ironically inspired songwriting, painting the caricature that grew out of the lifestyle of 1960's and 1970's rock icons and persists even today. Sister is one of my favorite tracks on the CD, along with If I Needed Someone. Beatles fans will hear very familiar style harmonies on these two songs. The album closes out with Slow Moving Train, perhaps the most on-point performance on the disc.

Brett Terry has a familiar, comfortable style and sound that will appeal to fans of Americana, and enough Beatles influence to appeal to fans of that band as well. Terry is a niche sound, but in large enough niche to garner significant attention. There's a slightly primitive quality to the sound that is endearing, suggesting Terry is comfortable allowing the songs to be what they are rather than over-producing them into something else. Instant History is an honest and enjoyable work with strong songwriting and a solid performance.

You can learn more about Brett Terry at http://www.brettsongs.com/ or www.myspace.com/brettterrymusic. You can purchase a copy of Instant History at www.cdbaby.com/cd/brettterry2.
Posted by Wildy at 5:10 AM