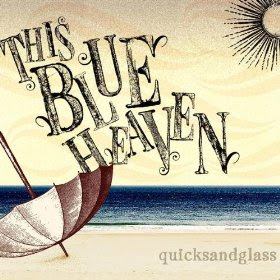 Boston quintet This Blue Heaven has one foot in the 1980's golden era of pop/rock and the other in the neo-folk/rock of bands like Rilo Kiley and Death Cab For Cutie. With a new wave sensibility and a stack of melodies that just won't quit, This Blue Heaven grabs hold of the listener by the ears and won't let go. Their debut album, Quicksandglass is a throwback to a not-too-long-ago time when bands wrote albums, not just a series of disjointed singles for dissemination into the ether.

Quicksandglass opens with Bliss, hearkening back to a sound originated in the girl vocal groups of the 1960's and revived somewhat in the early 1980's. MacKenzie Outlund has an exceedingly warm and pleasant voice that is perfect for this material. The guitar work sounds like Brian May is sitting in, a credit to guitarist Stu Dietz. My Disgrace is a classic unrequited dysfunctional love song wrapped in a wonderful new wave arrangement and a sing-along vocal line. As Ever As Always continues in the New Wave vein with a slightly repressed rocker that would have been Top-40 material circa 1985. Any Other Way is another classic dysfunctional relationship pop song, wonderfully melodic and upbeat in spite of its somewhat dark lyrical nature.

But As Hard As You Try is a song that, released 25 years ago, would have been a monster hit. There's still strong commercial potential here, although obviously the musical mores of the day have change some in a quarter century. Think Corey Hart around 1985 and you have an idea of the sound here (with a female vocalist). Be sure to check out Insomnia, easily the darkest song on the album with a fuzzy soundscape that is memorable. Other highlights include This Time, Future World, When It Feels Like You've Never Been Gone and personal favorite Where The Living Starts.

This Blue Heaven has crafted a highly listenable and intriguing sound. Quicksandglass makes quite an impression, and there's every reason to think This Blue Heaven is here to stay. Make some time to check these guys out, it'll be worth it.

You can learn more about This Blue Heaven at http://www.thisblueheaven.com/. You can get the digital download of Quicksandglass from Amazon MP3. You’ll have to contact the band directly if you’re looking for a CD as we were unable to find any online outlets.
Posted by Wildy at 5:10 AM