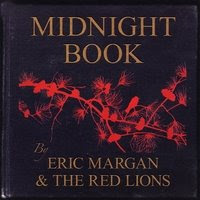 Eric Margan & The Red Lions originated in the Albany, New York area and has recently migrated to New York City. Margan's previous band, Aficionado was a popular cover band in that market, but Margan felt the need to follow his own muse. The College Of St. Rose grad has found a significant following for his new band in the Albany market and is ready to take on the world with their debut album, Midnight Book, which chronicles a relationship from its earliest beginnings to through the end and aftermath. This is not an album you can pick and choose from, but each song is like a chapter in the story that loses something without the context of the rest.

An Ocean Blue represents the boundless opportunities at the beginning of a relationship, with no obstacles on any horizon and beauty is personified in each moment. The arrangement is reverent and full of awe, buoyed by full orchestration. I'll Never Know sounds like something out of a French or Italian Film, complete with martial themes and a "Men are from Mars, Women are from Venus" theme, while Disintegrate marks a turning point between growth and decay. Old Man River is my favorite song on the disk, full of dark and unsettling themes representing the creeks that run into the river that finally tears the relationship apart. What's most interesting is that even the notes of anger that occur appropriately in the process of this storied relationship are more reflective than full of the fire of the moment. If there is any knock on this recording at all, its that it could use that fire in a couple of spots, even if only to provide shading to the more pensive aspects of the relationship. Other highlights include Down The Water, The Blues Will Have To Do, Midnight Book and Without The Sun.

Eric Margan & The Red Lions tells a cohesive and vibrant story of one relationship on Midnight Book. With arrangements that give tribute to some of the later, orchestra-enhanced Beatles compositions, Margan paints the rise and fall in masterful musical brush strokes. There's no doubt that Margan has big things in front of him. Midnight Book should do very well although it can't really be considered a pop record. If we had any wish for the record at all it would be to hear a little more of the raw emotional impact of the relationship in the songs, even if only once or twice. Margan's writing is masterful, but he's writing here from the reverie of time gone by. The picture is gorgeous and sonically pleasing, but absent the extreme highs and lows that were doubtless a part of it all. Even with that, Midnight Book is an excellent debut.
Rating: 4 Stars (Out of 5)

You can learn more about Eric Margan & The Red Lions at http://www.ericmarganandtheredlions.com/. You can purchase a copy of Midnight Book at www.cdbaby.com/cd/emarganrl.
Posted by Wildy at 5:20 AM