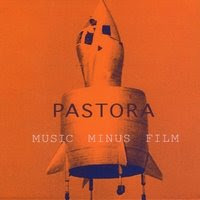 Brooklyn-based singer/songwriter/producer Derek Buckner is Pastora, an ambient alternative collective of one. Best known as vocalist/guitarist for alt-country faves Sugarpine, Buckner has also previously released albums under his own name and Aquaboy. Buckner’s latest, as Pastora, is Music Minus Film.

Buckner is quite original and vibrant at the front of Sugarpine, and so I was expecting some of that same energy to come across on Music Minus Film. The album ranges through the realms of Electronica to the occasional singer/songwriter piece done in electronic garb. In general I just didn’t feel the vibe on this album. The energy just didn’t come across, as if this process were more of an academic one for Buckner than done out of love for the music. The one real exception on the album is El Contador, which does come across with a sort of muted mischief. Buckner channels Mark Knopfler just a bit here, right down to a parallel subtle guitar style (not quite the same but close). The rest of the album just passed for me without even really noticing the change in songs. The listening wasn’t an unpleasant experience; it just didn’t leave much of a distinct impression either way (except for El Contador).

Make sure you check out Pastora’s Music Minus Film. Just because I didn’t get doesn’t mean you won’t.

You can purchase a copy of Music Minus Film at www.cdbaby.com/cd/pastora.
Posted by Wildy at 5:00 AM