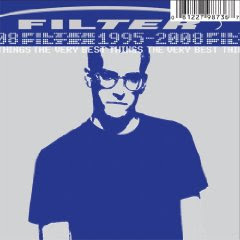 I remember working part time in a record store back in the mid-1990's and seeing Filter's debut album come first come into the store. I was intrigued by the plain yet stylish cover, when the manager walked by and quipped, "Don't bother, those guys suck." Nearly fifteen years later and an awful lot of people disagree, but until this week I'd never heard a single one of Filter's songs (or so I thought). The Very Best Things (1995 – 2008) is my first musical introduction to the band, and I went through the full range, from pure enjoyment to reaching for the skip button. On the whole, however, it's an impressive collection.

The set opens with one of Filter's biggest hits, Hey Man Nice Shot, featuring the heavy guitar and industrial rhythms you might expect out of Nine Inch Nails. (Can't You) Trip Like I Do plays heavily on Filter's heavy rock pedigree and marries it with the heavy dance beats of Crystal Method in a surprisingly pop-oriented heavy rock anthem. It's when I get to the radio edit of Take A Picture that I realize, "Hey! I've heard this before". This song is very stripped down from the heavier sounds that preceded it and has a great pop sensibility woven into the music. Fans will be pleased with the musical selection in general, although the dedicated fans will already have all of these songs. Other highlights include. Where Do We Go From Here, I'm Not The Only One, The Best Things and Thanks Bro.

Filter is an accomplished Modern Rock band with veins of Metal, Alternative and Industrial running through their music. The Very Best Things is a solid compilation album that may sell well to ne fans, but established fans already have what's here. Based on the material alone it’s a solid collection, although there’s little to make it appealing to folks who already have the discography.

You can learn more about Filter at http://www.officialfilter.com/ or www.myspace.com/filtersongs2. You can order a copy of The Very Best Things at Amazon.com, as a download through iTunes, or in music stores everywhere.
Posted by Wildy at 5:10 AM