Review: Simavi - Memories Of You 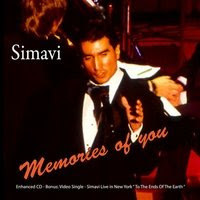 New York City crooner Simavi spent several years putting together the 23 tracks on Memories Of You, released in 2008 on Original Cast Records. Back by a 50-pieces orchestra, Simavi tackles classics from the American Standard songbook as well as some lesser known gems. Arrangers for this disc include the likes of Quincy Jones, Johnny Mandel, Nelson Riddle and Billy May. The disc also includes video footage of a live performance from New York's Lincoln Center.

Simavi has a pleasant voice that is period-perfect for the material he's singing, but its not the best voice on the market. Similar to Frank Sinatra or Johnny Mercer, Simavi relies on his ability to sell a song to overcome those vocal flaws, but Simavi lacks the charisma of Sinatra or the panache of Mercer. The vocals are very straight forward renditions of the classics and near-classic Simavi's chosen for Memories Of You. The orchestration is incredible. The orchestra employed by Simavi creates an amazing musical canvas on which to work. Highlights include The Girl From Ipanema, I Get A Kick Out Of You, Love Looks So Well On You and Fly Me To The Moon.

Sinatra had an ability to electrify a song with his conviction. Johnny Mercer spent most of his time writing for others, but had a knowing warmth and a wink that made you feel like you were in on the joke. Simavi may be able to bring some of those qualities out in front of an audience, but they are absent here. The vocals are clean and technically proficient, but lack the heart and soul to make these songs soar.

You can learn more about Simavi at http://www.simavi.us/ or http://www.originalcastrecords.com/. You can purchase a copy of Memories of You at www.cdbaby.com/cd/simavi or download the album from iTunes.
Posted by Wildy at 5:00 AM