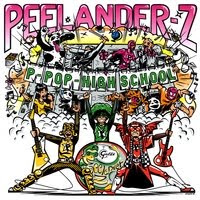 This would have been a great review to run on April Fool's Day, because people unfamiliar with Peelander Z would think it was a joke. Peelander Z is "New York City's Japanese 'action comic' punk band". The band is made up of founders Peelander-Yellow (Kengo Hioki; guitar and vocals); Peelander-Red (Kotaro Tsukada; bass) and newcomer Peelander-Green Akihiko Naruse; drums). All claiming to be from planet Peelander, the trio met in New York City and have formed one of the most original and dynamic rock acts the city has to offer. Peelander Z's latest album, P-Pop-High School was released on April 14, 2009, and is rumored to be a great soundtrack for human bowling, limbo dancing or wresting (professional or otherwise).

Let's Go! Karaoke Party is full of an almost drunken joy and just a bit of punk spirit. Imagine Green Jelly (originally Jello) crossed with The Ramones with an inebriated John Belushi Samurai on lead vocals and you have an idea of what to expect. The combination is so ridiculous and original that it works. The lyrics are bound to get classified as bordering on novelty, but the music is the real deal; Peelander Z could stand up to the best punk bands in New York City and their sense of joy at playing music shines through every power chord. I'll admit I had a hard time understanding some of the vocals, but it really doesn't matter. This is not a band you listen to for the pithy nuances and lyrical subtleties. Peelander Z is a band you listen to at high volumes, preferably with a hundred or so of your closest acquaintances in spirit-filled environment. The stage show Peelander Z puts is rumored to run just shy of madness, and if the music is any indication you can see.

Check out Pillow Pillow for a display of pure exuberance you won't find this shy of The Barenaked Ladies or They Might Be Giants. Even subjects like Duct Tape and Autograph(s) become potent song fodder for Peelander Z. Make sure you check out Ninja-High School, Panda-Ill, Give Me Your Smile and Pho!
Peelander Z is unique and original. This is a band that will put a smile on the face of the most skeptical audience member, even through the cold and impersonal portal of CD/MP3. If you experience P-Pop-High School, do so with just one expectation: You will be entertained. It's not life-changing music and it won't necessarily make the world a better place, but as music therapy it’s a place to lose yourself for an hour and just remember why you liked music in the first place. Very well done.

Yu can learn more about Peelander Z at http://www.peelander-z.com/. You can purchase a copy of P-Pop-High School at www.cdbaby.com/cd/peelanderz4.
Posted by Wildy at 5:20 AM

Labels: Barenaked Ladies, The Ramones, They Might Be Giants