Review: The Apostrophe S - No Nature In Space (demo) 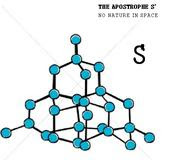 The Apostrophe S – No Nature In Space (Demo)
2008, Prisms And Chisels Inc.

Bethlehem, Pennsylvania’s mix a post-punk approach with a new wave melodic sound and just a touch of psychedelia to create a sound that sounds a bit like a lot of people and exactly like no one I know. Influences include Modest Mouse, The Flaming Lips, Weezer, The Pixies and The Cars. No Nature In Space is the band’s first full-length demo, mixing high energy with Lo-Fi antics. Let’s check it out.

Garage rock. Lo-Fi. Call it what you want, but there's a certain attraction to the raw form of Rock N Roll that is practiced by bands everywhere on their way to finding a sound. Some bands manage to stay within that sound and carve out their own niche, or a hybrid between Garage and something else. The rest of the bands that stay in the garage range never quite find the right mix of sound and style to declare themselves. The Apostrophe S is a band that is searching for that sound and style. There is an almost ambivalent feel that comes from their demo, No Nature In Space, as if there are strong desires for different directions in the band. The first breakthrough comes on Skeletons, the 6th track. Skeletons mixes a reggae sound with that lo-fi mystique behind one of the better vocal performances on the album. There is life and energy to the song that has been somewhat muted on the first five tracks. Ode To The Sea goes for a minimalist ballad that relies on subtle progressions and an almost ethereal air that reminds me a bit of The Rheostatics. Other songs of interest are Until I Find You, 423 and Untitled.
Assuming the mix of songs is somewhat progressive for time, it sounds like The Apostrophe S is searching successfully for their sound. I am not sure that they've found it yet, but it sounds like they've got a couple of possible directions that at least sound promising. Right now this is a good bar band, but perhaps not one you'd invite to a party, as there is a bit of a melancholy feel to a lot of their songs.

You can learn more about The Apostrophe S at www.myspace.com/diamondvan.
Posted by Wildy at 5:00 AM

Labels: Modest Mouse, The Apostrophe S, The Cars, The Flaming Lips, The Pixies, The Rheostatics, Weezer