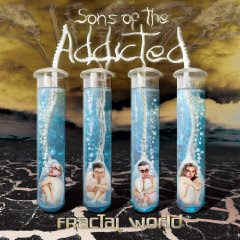 Ridgway, Colorado (pop. 750) is home to Sons Of The Addicted, a ready-for-primetime Modern Rock Act with a distinctive sound and a drive to succeed. Their debut album, Fractal World was released in 2008 and hits all of the right notes for Modern Rock radio. Led by writer/singer/lead guitarist Stosch Dembitsky, Sons Of The Addicted are carving out their own piece of the angst-driven hard rock pie.

Influences of or similarities to bands such as Incubus, Primus, Tool, Joe Satriani, Queensryche and Stone Temple Pilots are apparent through Fractal World, but Dembitsky's creative guitar styling and distinctive voice keep Sons Of The Addicted from falling into a sonic rut. The disc opens with guitar rocker Hold Onto Me, featuring Dembitsky's frantic guitar and vocal style. Lyrically dense, the song is almost a melodic rap tune. State Of The Union sounds like a laid back Queensryche tune, with Dembitsky even getting the same vocal intonation as Geoff Tate. Heroes Of Time hits on an Living Color style guitar riff and builds into an epic story song with its roots in Progressive Rock.

Your New Deal shows off the compositional and guitar-style choices that are somewhat unique to Dembitsky and Sons Of The Addicted. There's almost always something interesting going on in the guitar lines of each song on Fractal World. On this tune in particular Sons Of The Addicted remind me somewhat of the ill-fated collaboration of Les Claypool and Alex Liefson, Victor. Other highlights include Cheaters, Never Again, Grey Matter and Fractal World.

You can learn more about Sons Of The Addicted at http://www.sonsoftheaddicted.com/. You can purchase a copy of Fractal World through Amazon.com.
Posted by Wildy at 5:05 AM