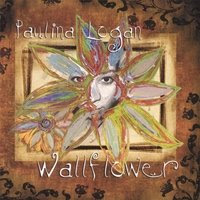 Ukiah, California’s Paulina Logan is blazing a trail of original thought in music, following in the footsteps of artists such as Ani DiFranco, Sarah McLachlan and India.Arie. Logan mixes deep lyrics and a musical patois of Country, Americana and Rock for an intriguing but vaguely unsettled sound. Wallflower, her first full-length album (third release) runs the gamut between Pop to Country and even a bit of Celtic thrown in.

Wallflower is a very unusual album in that it never really settles into a sound. It’s hard to tell from just one album whether Logan is still casting around for a sound or whether she simply chooses not to be bound by a genre. The result is an uneven yet entertaining collection of songs. Wallflower (the title track) is dark and confrontational, coming off as very cold with all of the electronic instrumentation and light-industrial influences. Sorry is a decent pop song with Americana undertones. Letter breaks into the Celtic/Country realm in a surprising and pleasant turn. Logan’s Too Far Gone has a Country/Folk vibe and an almost Reggae-like rhythm that made me chuckle at first until I realized it worked. The second half of the album was pleasant but unremarkable, although Scared expanded Logan’s stylistic repertoire a bit further by including a rap.

My first guess is that Logan is still searching for her sound, although I wouldn’t entirely rule out the stylistic choice argument. Wallflower has its highs and lows; there are some great songs here and some I would probably skip over on future listens, but it’s clear that Logan is talented with an authorial voice that is likely to produce more good material over time. Wallflower is a positive introduction to Paulina Logan for those of you haven’t heard of her before. Check it out.

You can learn more about Paulina Logan at http://www.paulinalogan.com/ or www.myspace.com/paulinalogan. You can purchase a copy of Wallflower at www.cdbaby.com/cd/paulina3, or you can download it through iTunes.
Posted by Wildy at 5:00 AM