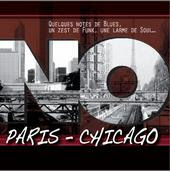 Grooving on a hot electric blues vibe, No creates a highly listenable and occasionally danceable album in Paris-Chicago. Opening with Laisser-Moi Passez, No kicks in a funky backbeat and a catchy melody to draw the listener's attention from the opening notes of the album. Nataf has a very pleasant voice and sounds more like a folk singer than a blues vocalist, but he makes the songs work very well. Paris-Chicago has a hot-n-cool feel to it, channeling a bit of B.B. King in the process. Plus En Enfant opens with a complex acoustic part and sticks with the acoustic gig throughout. Je Mais Que Tu Alors... Just Me sounds very familiar from the outset, borrowing the same chord progression and nearly the same style of Stray Cat Strut. My favorite song on the album is Les Vendeuses De Charme, with its classical guitar opening and reggae rhythms. Respect is a sweet sounding ballad and a great balance to the more upbeat material on Paris-Chicago for the first minute, before breaking into an upbeat rock tune. No closes out with two covers, a blues cover of Stevie Wonder's Higher Ground, which I liked, and a highly intriguing blues rendition of The Eurythmics' Sweet Dreams. This was the highlight of the album; a wholly unexpected and eye-opening interpretation that practically redefines the song.

No took a few listens. Paris-Chicago was one of those albums I didn't like much upon first listen, but it grew on me. My French isn't anywhere near as good as it once was as I just haven't used it in many years, so I can't really comment on the lyrical comment, but Paris-Chicago is a highly enjoyable listen. Be sure to say yes to No.

You can learn more about No at www.myspace.com/nothefrenchsinger or http://www.website-no.com/. Currently, Paris-Chicago is available as a download only through No’s store, but will soon be available through other outlets and as a physical CD.
Posted by Wildy at 5:10 AM