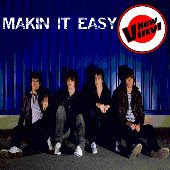 Tired of teeny-pop? Maddened over the state of Metal? Wondering what happened to good old fashioned guitar solos and rock music that kicked some tail? I’d like to introduce you to New Vinyl, a quartet out of Wakefield, Northeast, United Kingdom. If you’re a fan of bands like Woodward or Tally Hall, then you’re going to love these guys. Driving energy, harmonies, just a touch of post-punk flavoring and a love of the music they are playing set New Vinyl apart from the pack. Far apart. Today we are reviewing two recordings, Makin’ It Easy (2008) and the band’s self-titled EP from 2006.

Two two-track single opens with Makin' It Easy, steeped in classic middle-America Rock N Roll with a dash of British Invasion frenzy thrown in, Makin' It Easy is highly melodic and as energetic as Rock N Roll should be. The song's vaguely reminiscent of Queen and The Beatles, or of modern acts Woodward and Tally Hall. Temptation is more of a post-punk anthem, although it holds onto that British melodic magic. Temptation is thoroughly danceable and is infectious as they come. This may have been a better choice for lead track.

The self-titled EP opens with Stephanie, a wonderfully upbeat but dark anti-love song. The protagonist is neurotically obsessed with the object of the song in a love/hate sort of fashion in a highly entertaining song. I'd Rather Be Alone is a mellow and introspective tune that is quite lovely. Its interesting hearing this material as it stands in stark contrast to the later single. It’s as if New Vinyl was at first something of an Adult Contemporary act that has gone nearly punk. Call For Rebellion brings us back to reality. New Vinyl regains some of their swagger in a song that would fit in well with a 1980s British New Wave act such as A Flock Of Seagulls. London Don't You Know is the highlight of the two singles. New Vinyl captures a rough yet reserved sound I love, sounding very much like Canada's The Lowest Of The Low. The harmonies are right on here, the sound is a bit more layered than I'd have suspected, but the track is very well written, performed and produced. The last track, Untitled, is a bit of sonic experimentation that is highly entertaining.

New Vinyl appears to have found a sound that works very well for them. Eschewing the rather unfortunate Emo trends, New Vinyl makes strong, sonically pleasing rock music that plays on the edges of Punk, Prog and Glam. New Vinyl has the swagger that's been missing from Rock music the past few years. These guys are worth checking out, supporting, etc.
Ratings:

You can learn more about New Vinyl at http://www.newvinyl.co.uk/ or www.myspace.com/newvinyl1. Makin’ It Easy is available for download on iTunes. If you’re looking for a copy of the self-titled EP, I’d suggest contacting the band directly through their MySpace page.
Posted by Wildy at 5:55 AM

Labels: A Flock Of Seagulls, New Vinyl, Queen, Tally Hall, The Beatles, The Lowest Of The Low, Woodward