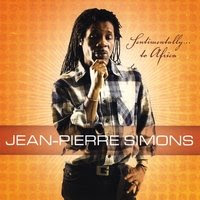 Jean-Pierre Simons is a citizen of the world, quite literally. Born in Cameroon, Simons lived in Paris for a number of years before settling in the San Francisco Bay area of California. His music encompasses African, Latin and European musical styles with a strong emphasis on classic American Pop music. His debut album, Sentimentally... To Africa, features 6 songs in English and 7 and French, all highly listenable and enjoyable. Simons has a sense of melody and rhythm that is impeccable, and a top-notch band backing him up. The result is an album you won't want to put away.

Sentimentally... To Africa opens with the title track, sounding like something that might have been a Paul Simon outtake from his Graceland sessions. Simons creates a very similar Pop/Rock/African traditional hybrid sound throughout much of the album. Take My Love is a great love song in the same vein, a highly infectious bit of pop music with African rhythms, horns and the electric guitar sound common to Simons albums of that era. Aime-Moi (Love Me) and Un Amour Impossible (An Impossible Love) are the first two French language songs on the album, both staying well ensconced in pop style with the essential African flavor that runs through the album. Une Place Au Soleil (A Place In The Sun) features some the best overall arrangement on the album, layering acoustic sounds in a song that touches on Pop, World and Jazz without quite giving in to any one style. My favorite song on the disc is Baobab-Tree, which will have you up and moving you feet even if you're not prone to dancing. Other highlights include Change In My Life, On Danse and Like A Friend.

Jean-Pierre Simons has the perfect blend of Pop and World styles on Sentimentally... To Africa. If it weren't for that Paul Simon guy we'd be talking about Simons' groundbreaking mix of styles, as it is its still a fine album that is highly accessible and commercial without trying to be either. This is feel good music you can move to, and no matter what language Simons is singing in, that feel good vibe is universal. Highly recommended.

You can learn more about Jean-Pierre Simons at http://www.jeanpierresimons.com/ or http://www.sighes.com/. You can purchase a copy of Sentimentally… To Africa at www.cdbaby.com/cd/jeanpierre2.
Posted by Wildy at 5:10 AM