Review: Fugitive Kind - You're Being Watched 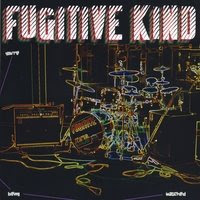 Fugitive Kind lead singer Lydia Marsala sounds like the mid-point of a triangle between Milla Jovovich, Chrissie Hynde and Johnette Napolitano. Her voice is alternately deep and sultry or high and heavily soaring. No matter what range she's in she's distinctive, and she is the perfect balance for the heavy guitar rock that supports her on You're Being Watched. Comparisons to Queens Of The Stone Age, Muse, and Live should be expected, but there is a pulsing mix of energy that develops between Marsala's vocals and the instrumentation that is more than just friction.

You're Being Watched opens with a funky guitar rocker called Little Piece. Marsala throws herself into the vocal line like it’s her life's only purpose; the band answers in kind in a performance full of anxious, nervous energy. This is perhaps the catchiest opening track I've heard yet this year; a great rock song that would get airplay on chutzpah alone. It's been a while since a female rock vocalist could push this much personality through a song (think Gwen Stefani before she went Hip-Hop/Pop). Over-Thinking It has a big, Modern-Rock sound and a vocal style that has a shade of Tanya Donnelly to it. Don't Waste My Time, my second favorite song on the CD, is a great Modern Rock anthem with an almost punk/dance vibe going on. Break Now is my favorite, and the by far the heaviest song on the disc. This song should be a Modern Rock hit. Wait has an interesting heavy ethereal rock sound that is a great change of pace, and Good-Bye Song is a nice closing song, bringing out all of the best qualities in Marsala's voice.

Fugitive Kind is a great rock band musically, filling tight arrangements with layers of sound that are interesting, rhythmic and, if not original, at least well done enough to make them worth listening to. Lydia Marsala's voice woven into the instrumental net built on You're Being Watched elevates them to something special. Marsala has a great voice, but there's something about the mix here that pushes everything up a notch. The album itself is a bit uneven in its flow at times, but well done throughout. In the old days of LPs you could have done a heavy and soft side with this material. For now, You're Being Watched is a great start.

You can learn more about Fugitive Kind at www.myspace.com/fugitivekind or http://www.fugitivekind.com/. You can purchase a copy of You’re Being Watched at www.cdbaby.com/cd/fugitivekind2, or you can download it from iTunes.
Posted by Wildy at 5:00 AM