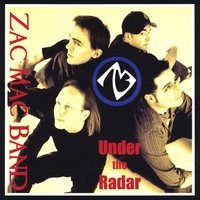 The Zac Mac Band has taken Boston, and now they’re ready to take on the world. Lead singer, songwriter, pianist and sometime guitar player Zac McIntyre was a finalist in 2008’s Great American Song Contest, and towers above the competition (he’s 6’10”). Inspired by bands such as Led Zeppelin, Coldplay, Chris Cornell, Collective Soul, The Killers and Snow Patrol. McIntyre writes intelligent and catchy mellow rock songs that get stuck in your head. The Hope, Maine native is a veteran of bands such as North Of Nowhere, The High End and Johnny Rainfield, but appears to have found a sound and style with the Zac Mac Band that is his own. ZMB’s latest release, Under The Radar, hit stores in March of 2009.

McIntyre has a very enjoyable voice. The songs on Under The Radar have a much laid back, nearly repressed mellow sound (think Barenaked Ladies’ Maybe You Should Drive album for comparison). McIntyre writes serious songs, but is not afraid to weave humor into the fabric of a song where appropriate. MySpace Heartbreak hits both serious and ironic notes in a New Wave/Pop tune about Post-relationship neurosis in a digital age. Highest Level is a treat for the ears; a modern mellow rock tune with a chorus worthy of Alan Parsons. Loaded Gun I didn’t connect with as well. Considering the subject matter the song is remarkably passive; the narrative and affect just don’t match at all. There is some Roy Orison inspired guitar work here and the song comes off sounding a bit like a John Mayer tune. 15 Songs On The Radio, on the other hand, is an inspired bit of writing. McIntyre takes us inside his head and the struggle to keep striving for your dreams when the possibilities are so limited (“So many other bands / they’ve got the same plans / and there’s only 15 songs on the radio.”) Anyone who has ever tried to make it in the music industry, or even stood in front of a mirror, air guitar in hand and wished will appreciate the sentiments here. Roll Me Over closes out the set in a somewhat generic Alt/Pop tune ala Dog’s Eye View or Matchbox 20.

You can learn more about the Zac Mac Band at http://www.zacmacband.com/ or www.myspace.com/zacmacband. You can purchase a copy of Under The Radar at www.cdbaby.com/cd/zacmacband.
Posted by Wildy at 5:20 AM