Review: Playing For Change - Songs From Around The World 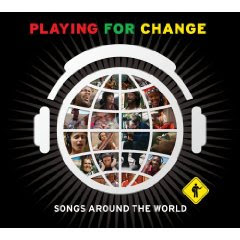 Playing For Change - Songs From Around The World
2009, Hear Music

Playing For Change is the brainchild of Grammy Award winning producer Mark Johnson. Johnson was on his way to work one day in New York City several years ago and witnessed the tangible response a group of New York City subway denizens had to two musicians on a subway platform. Johnson was reminded in that moment of the power of music to change people, events, etc. From that moment came the seeds of Playing For Change. Traveling first around 4 major cities in the US and eventually around the world, Johnson and his team spent several years filming/recording unknown musicians from the four corners of the earth. On April 28, 2009, Songs From Around The World will become available for sale, and it may just be a life-changing experience for some.

Songs From Around The World opens with Stand By Me, a classic folk take on the Ben E. King/Leiber & Stoller classic with elements of Soul, Reggae and Gospel woven in. The video for this song has been making the rounds on YouTube for months. The singers are Roger Ridley, Grandpa Elliott and Clarence Bekker, performing with a truly international band. The Playing For Change band next tackles Bob Marley’s One Love in an arrangement that sounds like Appalachian Blues gone Reggae (if there is such a thing). The vocal arrangement here is primo, and the instrumentation is as down home as it can get. Marley’s War/No More Trouble is one of the more enjoyable songs on the disc, featuring vocalists including Bono and Bob Marley, but the highlight is the cover of Peter Gabriel's Biko. Performed in an Americana arrangement, this rendition puts a fresh spin on the song while staying true to the spirit of the original. Afro Fiesta's rendition of Tracy Chapman’s Talkin' 'Bout A Revolution is inspired, and Keb Mo' is his incomparable self on Better Man. Another highlight is the Omagh Community Choir's rendition of Love Rescue Me. The album closes out with the Playing For Change band giving a standing-O performance of Sam Cooke’s A Change Is Gonna Come. The accompanying DVD features videos of several of the songs on the CD.

Playing For Change is an acknowledgement of, and a testament to the power of music to change the world. Johnson is witness and messenger to the power of music, seeing an esoteric performance in a subway bond together a hundred or so hard-nosed New Yorkers. Grammy Awards aside, this may be his legacy. The album itself is a great listen and highly recommended for roots music fans, or fans of great music, whatever the ilk. Even on the slower songs the artists on Songs From Around The World give their all; the energy and joy in this music is undeniable.

You can learn more about Playing For Change at http://www.playingforchange.com/. Songs From Around The World goes on sale April 28, 2009. You can pre-order your copy from Amazon.com.
Posted by Wildy at 5:20 AM