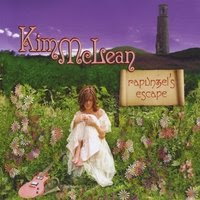 Kim McLean mixes Appalachian Country/Folk with an occasional dollop of Blues and a bit of sass on Rapunzel’s Escape. Perhaps best known as a songwriter, McLean is a pretty mean performer in her own right. Her soulful, homey voice is a pleasant listen. Her guitar skills are very apparent, and her attitude is the perfect mix of sass and maturity. Rapunzel’s Escape opens with Ain’t No Glory, the first single and arguable the most commercial track on Rapunzel’s Escape. Born To Be Happy sounds like the big winner here, however. Born To Be Happy is born for country radio, and McLean’s performance is the perfect mix of old country spice and modern Country’s pop orientation. My personal favorite song on the CD is Beautiful Goodbye. It’s a song about making the right decision in spite of what your appetites may be telling you, and how good it feels taking the right path. Cracks In The Concrete is a close second, mixing some old school country with a bit of Memphis Blues for the most entertaining and danceable track on Rapunzel’s Escape. Other highlights include Break The Glass, A Beautiful Day With You, Always Know and Because God’s Good.

Kin McLean is a talented singer and songwriter. Her ability to cover so much ground musically without ever sounding out of place is a true gift. McLean doesn’t so much bend herself to each style she plays; rather she makes each style and sound her own with a signature flair. There’s a bit of Bonnie Raitt in McLean, but with a wider musical range. Rapunzel’s Escape is destined to be featured on several year-end “Best Of” lists.

You can learn more about Kim McLean at http://www.kimmclean.com/ or www.myspace.com/kimmclean. You can purchase a copy of Rapunzel’s Escape at www.cdbaby.com/cd/kimmclean6.
Posted by Wildy at 5:48 AM