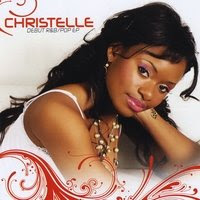 Christelle - Debut EP
2009, Christelle
Indie R&B singer Christelle is a native of Gabon, West Africa. All of 19 years old, she immigrated to the United States in 2006 knowing very little English. Entering intensive English studies, she has now transitioned to design school where she is working to develop her own clothing line to coincide with her music. Christelle began vocal training in 2008 after being inspired by the rise of Rihanna, and has already recorded twenty-four songs. Her appropriately titled Debut EP was just released.
Christelle opens with Can You Handle Me, featuring guest artist Agacee. This is fairly typical Pop/R&B/Dance fare. Christelle sounds a bit young here, and that may feed the popularity of the song on the club circuit. The song is very danceable but sounds too much like much of what's already been done to really stand out. Busted is a little more pop oriented, allowing Christelle to show off her voice, which is sweet. The harmonic construction here is pretty neat; this is a song that could have some legs on Pop radio, and definitely should play well in the clubs. I'm A Tease sounds like a song you might associate with a character, I mean a contestant in a reality TV show. It's a great pop/dance arrangement, and Christelle shows more than capable pipes on what may be the most radio and club friendly song on the CD. Don't be surprised if this song gets licensed for TV. Christelle tries to go the R&B ballad route on Feelin' You (La La La). The song is decent, but Christelle just sounds a little too cute to pull this one off. I Can't Be Me takes a little bit of a darker tone, and it sounds like Christelle's voice has been altered to give it a darker quality. The song works but not as well as some of the other material here. The EP closes out with Excess Vibration, a pure club tune with great beats.

Christelle's Debut EP tries to be several things. For the most part it works, but a part of me wants to see her pick a direction and go with. The attempt to do R&B AND Dance AND Pop and even a darker, alternative foray make it seem like her producers are throwing everything at the wall to see what sticks. Christelle sounds like a talented if not overpowering vocalist with a very sweet sound. Attempts to make her into something other than what she is are bound to fail, but Christelle has real potential just being herself. The moments on Christelle that work revolve around Christelle just being who she is and singing for the joy of it.

You can learn more about Christelle at http://www.christellemusic.com/ or www.myspace.com/christelle. You can purchase a copy of Debut EP at www.cdbaby.com/cd/christelle.
Posted by Wildy at 5:10 AM