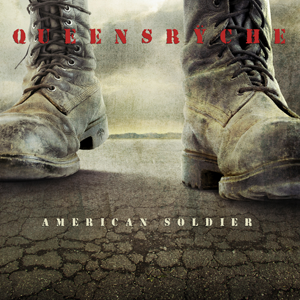 Queensryche is back with their latest CD, American Soldier, released March 31, 2009. Opening with Sliver, Queensryche pays tribute to the men and women who are put in harms way while already beginning to question the reasons for that condition. Co-opting some stylistic elements from Hip-Hop, Sliver has a very edgy sound that is a bit out of the box but still essentially Queensryche. The band pulls no punches on the next track, Unafraid, looking at American culture from the perspective of those who are not privy to its benefits, contrasting that with voiceovers of interviews from an American soldier as well as a voiceover about the combatants in Vietnam. Queensryche is no stranger to concept albums, and it’s very apparent that there's a concerted message on American Soldier pertaining to the failings of foreign policy both to the country at large and the soldiers who represent her in the field. Somewhere along the way that focus on message has stolen a bit of the edge from the music. That's not to say it’s a bad album; quite to the contrary. From a sonic perspective this might be one of the more pleasing Queensryche albums since Empire, but there is a certain spark missing that would take a good album over the edge into greatness (Empire had that spark).

My favorite track on the album is A Dead Man's Words, which definitely has that spark and inspiration. This is one of the darker songs on the album, and even in its slower moments you can hear the vibrancy running through each note. Man Down gets close to what long time Queensryche fans are looking for. Vocalist Geoff Tate is at his absolute best here, and there is real drive to the song in spite of a slightly softer presentation. Other highlights include the haunting Remember Me, Home Again and The Voice.

American Solider is a treatise set to music. The message was most important in this record from start to finish, to the point that it appears to have sapped Queensryche of some of the raw power that is characteristic of their recordings. Whether there is a temporary coda or significant of the long term gentrification of the band remains to be seen. It's a good album; very sonically pleasing and full of the trademark sound of vocalist Geoff Tate, but lacks some of the fire and energy of earlier releases. American Solider is good, but not their best.

You can learn more about Queensryche at http://www.queensryche.com/. You can purchase a copy of American Soldier at Amazon.com or wherever music is sold. Downloads are available through numerous outlets, including iTunes.
Posted by Wildy at 5:10 AM