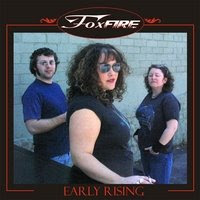 Marietta, Georgia's Foxfire is a classic power trio born from the early 1970's Garage Metal movement. If the Runaways got into an alley fight with Courtney Love and Hole and put together a band from whoever was standing at the end then you might have something a bit like Foxfire. Big guitar sound and structure are the key elements here; melody and composition are almost secondary on Early Rising, the band's debut CD. Vocalist Rachel Collins has a decent Rock/Metal voice, engaging the same rasp that made Janis Joplin a household name but without the same tone or color.

I've listened through this album several times now, and I struggle to find even one track that really stands out from the rest. That's not an indication that the album is bad, it's solid and fairly uniform throughout. The sound has a definite Lo-Fi flavor, sounding like it may have been recorded in one or two takes in a concrete room with minimal production gloss. The sound is true to the nature of the band, who are probably better appreciated in a live setting. In a bar, with the amps turned way up, Foxfire can create a wall of sound through sheer force. On CD, it just doesn't carry quite as well, with the music sounding a bit thin and a bit too much like so much that's gone before.

Early Rising isn't a bad album, but there also isn't anything specific about it that elevates it to memorable status. Early Rising represents solid work from a solid band.

You can learn more about Foxfire at http://www.foxfirerocks.com/. You can pick up a copy of Early Rising at www.cdbaby.com/cd/foxfiresongs2.
Posted by Wildy at 5:00 AM