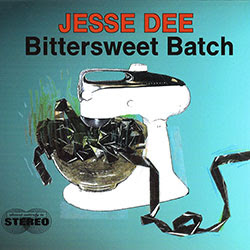 Boston native and Burlington, Vermont resident Jesse Dee has a love for classic soul music that shines through everything he sings. Notably an artist and graphic designer, Jesse Dee made the decision to make a career of music. He’s already open for R&B Legend Al Green, and credits influences such as Otis Redding, Sam Cooke, Etta James and the old Chess vocal groups as influences. Jesse Dee is a former member of college favorites Decifunk, and also has done time with The Dirty Whites and Sea Monsters. Jesse Dee’s solo debut album, Bittersweet Batch, hit shelves in September of 2008. If it’s any indication you’ll be hearing a great deal more of Dee in the future.

Jesse Dee is the real deal. You won’t hear the sort of aural airbrushing on Bittersweet Batch that is some common these days. Dee’s voice is highly emotive and textured, with the sort of vocal flaws that made the classic R&B and Soul singers so distinctive and interesting to listen to. The album opens with Alright. Dee’s rough-velvet voice is right up there with Melinda Doolittle for bringing classic soul back into the spotlight. Slow Down is one of my favorites in the album, with a highly positive message and a great arrangement. This song will stay with you. Over & Over Again sounds like classic Motown, complete with Stax horns. Dee brings the funk on Reap What You Sow, a must-listen song. My Two Feet brings in the sounds of New Orleans on a great classic pop song. Dee revisits New Orleans on New Blades Of Grass; a song about Hurricane Katrina and about the will of New Orleans residents to rebuild and survive that tragedy. Be sure to check out Alive & Kickin’ as well; the biggest soul/rock/gospel/roadhouse sound on the album.

Jesse Dee kicks it old school on what may be the most traditional Soul/R&B release of the year for 2008. If you are a fan of these genres then Bittersweet Batch is a must-have disc.

You can learn more about Jesse Dee at http://www.myspace.com.jessedee/, where you can purchase a digital download of Bittersweet Batch.
Posted by Wildy at 5:20 AM

Jesse Dee is from Arlington, MA - not Burlington, VT.