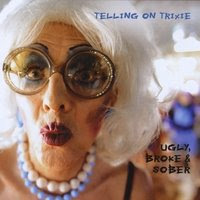 New York City rockers Telling On Trixie bring the anthemic power-pop on their sophomore album, Ugly, Broke & Sober. After being voted Logo's #1 band of 2007 for their self-tited debut album, it would be easy to understand a bit of a sophomore slump. Telling On Trixie never heard of such a thing. Rather than standing pat with the formula that worked the first time, the band stretches their boundaries on Ugly, Broke & Sober without abandoning the melodic spirit that got them where they are.

Ugly, Broke & Sober opens with Shooting in 60, an anthem for today's celebrity-obsessed culture. Crash Me Up is an interesting experiment. Telling On Trixie asked their fans to submit words or phrases to be turned into song lyrics. Crash Me Up is the resulting word jumble. The exercise, and song, works, sounding like a cryptic but mostly cogent lyrical construct. The strong pop/rock arrangement and harmonic dressing doesn't hurt either. The most pleasant surprise of the album is the very dark interpretation of Belinda Carlisle's Mad About You. The tenor and tone of this version implies perhaps a different aspect of madness than the original, but the song is none the worse for this treatment. Lead vocalist Derek Nicoletto sounds a bit like Adam Pascal, or a poor man's Steve Perry, with much of the same vocal quality but not quite the same range.

The Deepest Dive is a prolific song of love for and faith in another person. This is a potential hit, with Nicoletto going for a more pure vocal sound. Ugly, Broke & Sober sounds like it could have been alternate song from the show Rent, both in style and content. Telling On Trixie breaks out their heavy boots on Your Silence, the heaviest rocker on the album (but still quite pop in sensibility). The album closes out with the spooky Steps To The Throne, which almost works but has some rough edges to it yet.

Telling On Trixie continues to take chances on Ugly, Broke & Sober. Most of them work, and even the instances where they fell short are intriguing. I'd much rather see a band take chances and miss once in a while than stand pat and calcify stylistically. Ugly, Broke & Sober is a strong sophomore effort that exceeds their debut in some ways. You can hear the artistic development that has occurred from album to album, and it makes one wonder if they'll keep on this path. If so, the future promises big things from Telling On Trixie. For now, Ugly, Broke & Sober is more than enough.

You can learn more about Telling On Trixie at www.myspace.com/tellingontrixie or http://www.tellingontrixie.com/. You can purchase a copy of Ugly, Broke & Sober at www.cdbaby.com/cd/tellingontrixie3.
Posted by Wildy at 5:20 AM