Review: Jeannine Hebb - Too Late To Change Me 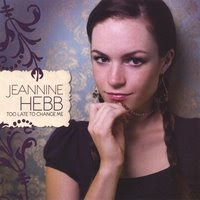 Jeannine Hebb is a highly decorated singer/songwriter, graduating with high honors from the Berklee College of Music in Boston and winning practically every award she was eligible for while there. Comparisons that have been made include Fiona Apple, Laura Nyro, Carole King and Norah Jones, but there's really no one to compare Hebb to. Her Pop/Rock sound borrows influences from Jazz, Blues, R&B and Soul and transcends them all into a sound that is just a little bit more than anything you've heard before. Hebb has played with Jazz musicians such as Ben Monder, James Genus, Tim Ries and Clarence Penn, and has graced well-known stages throughout the Northeast US. Jeannine Hebb's debut EP, Too Late To Change Me, is a musical revelation for those tired of the usual tricks of the Pop trade.

Too Late To Change Me opens with Only Ones, a song about the side of ourselves we show only to ourselves or to the ones we love. There's a strong theatrical feel to this song, like it might have just walked off a Broadway stage somewhere. Elements of Jazz and 1970's singer/songwriter pastiche abound in an unusually intelligent and quasi-analytical yet affecting song about the power of love. Things Haven't Been So Bad Lately captures the lost and alone feelings that can overcome someone living in the anonymity of a large city, as well as about the human capacity to adapt to such a harsh environment. Ultimately, the answer is to find others or even one other, but the protagonist is declaring a standoff with loneliness, even if only for the benefit of the listener. All The Way Down is a song about growing up, juxtaposing maturity with falling from a place where our heads are "full of clouds". Once again there is a strong theatrical quality to the song, and Hebb uses blues-style slide guitar to counterpoint the plaintive piano that drives the song.

Too Late To Change Me is more of a straight up Pop/Rock tune, and a declaration of self like one might make in a relationship. The song is unapologetic but sad and self-knowing, and beautifully human in concept and delivery. Just Enough For Me has an almost Bill Withers vibe, mixing the boundaries between Soul, Jazz and Pop. It's a love song from a cynical perspective, with the protagonist layering certainty over fear in a declaration that's as much about loneliness as it is about love. Whatever You Want closes out the set and is easily the most beautiful and simple composition on the EP. Hebb displays vulnerability through certainty, giving in to another's wishes in an ambivalent fashion that speaks words about how unhappy she really is. It's hard to escape the story-like quality with which Hebb writes songs. Whatever You Want sounds like the keynote song for a major character in a musical, but it’s the conviction with which she inhabits these songs as a vocalist that's most impressive. The only comparison I can come up with for this quality is Randy Newman.

Jeanine Hebb's voice is quite possibly one of the most striking in popular music, able to belt with the best of them one moment and break your heart with a soft passage the next. Too Late To Change Me is one of the finest debuts I've had the opportunity to review. It's a Wildy's World Certified Desert Island Disc, for certain. Make sure you acquire Too Late To Change Me, and make every effort to see Jeannine Hebb if she plays in your neck of the woods. The time will come when you won't get anywhere near a show without paying Live Nation prices.

Learn more about Jeannine Hebb at http://www.jeanninehebb.com/ or www.myspace.com/jeanninehebb. You can purchase a copy of Too Late To Change Me at www.cdbaby.com/cd/jeanninehebb.
Posted by Wildy at 5:20 AM