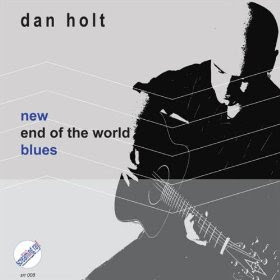 Euclid, Ohio’s Dan Holt has been making music for nearly 30 years now. He’s familiar to fans in the Midwest US as a former member of blues outfits Five Believers and Vertigo Men. Holt’s latest solo release, New End Of The World Blues was released in 2008.

I have to admit that I didn't really connect with this album. New End Of The World Blues is an acoustic blues album that is essentially just Holt on guitar and vocals. Holt is amazing with the guitar in his hand. Some of the things he does on the album are jaw-dropping with regard to intricate arrangements and guitar work. As a vocalist he has a good voice, but the energy level and charisma that comes through on his guitar just isn't matched by his voice. As much as I enjoy the acoustic blues style, Holt is an artist who would benefit from creating and recording with an ensemble. Nevertheless there are a few highlights here that I'd like to mention. What Do You Want From Me is my personal favorite, in a Hank Williams Sr. meets Muddy Waters moment. Chronic Depression is an amusing patois of Country and Blues. Get In My Car is a prime example of the impressive guitar work Holt is capable of. For much of the rest album I simply listened to the guitar work. From that perspective it’s a great album, but the vocals did grate on me a bit and the uniformity of dynamic and sound made it difficult for me to really get into this CD.

I am not knocking Dan Holt. He has a decent enough voice, but every once in a while as a listener you come across a voice that just doesn't sit with you, and that was my experience here. Don't let that stop you from checking him out, because you're likely to have a different reaction than me, but if you're looking for some amazing acoustic blues guitar work, then New End Of The World Blues is definitely worth your time.
Rating: 3 Stars (Out of 5)

You can learn more about Dan Holt at http://www.danholt.com/. You can download New End Of The World Blues at Amazon MP3 or iTunes. If you want a hard copy, you’ll have to attend one of Dan Holt’s shows, but if you contact him through his website perhaps he’ll hook you up.
Posted by Wildy at 5:00 AM