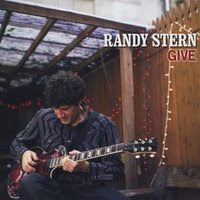 Randy Stern’s resume is full of Indie Cred and even some big names. As the former singer/songwriter/guitarist of Brooklyn’s The Nerve, Stern gained significant respect and admiration in the New York City scene. He ultimately was invited to play in Bumblefoot’s (Guns N Roses) touring band for a 2005 jaunt through Europe. In 2006, The Nerve disbanded, and Stern began to pursue solo writing and performance. Putting aside the punk sound, Stern has striven for a more mature, subtle songwriting style. With the help of producer Hugh Pool (Patty Smith, Rufus Wainwright, Hubert Sumlin, The National), Stern has firmly established himself as a competent solo artist with his debut album, Give.

Give opens with Deeper And Deeper, a pop-oriented Americana tune with real potential. Better Days is a solid, Southern Rock tune that's steeped in the blues and Rock N Roll. Stern has a very pleasant sounding voice that works very well with the blend of Rock, Americana & Pop he purveys. The Night is a highly catchy and commercial sounding track that could garner some attention on the radio. My favorite track on the album is the R&B/early Rock gem The Only Woman; complete with walking bass line. Into Your Heart is the pre-requisite mix-tape offering, although this isn't your typical love ballad. Stern gets highly personal here, eschewing cliche in favor of honest emotion. The song is very touching and might even make a good wedding song for the right couple. Other highlights include Home, In The Midnight and Ain't Dead Yet.

Stern has a home grown style to his playing and singing that is refreshing. You'll hear shades of Gordon Lightfoot, Bob Dylan and even Ryan Adams running through his song, but in the end Randy Stern isn't really like any of them. His is an original voice in a crowded field. Give isn't flashy, there are no big lights or whistles here, just good, honest music. Make sure you check out Randy Stern.