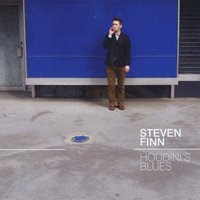 Steven Finn was inspired to make music by Bob Dylan’s Hey Mr. Tambourine Man. Influenced heavily by Sonny Boy Williamson and Sonny Terry, Finn gets a lot of blues mixed in with a distinctive singer/songwriter style. The Manchester, England native and London dweller released his solo debut in 2008. Houdini’s Blues will make listeners sit up and take notice.

Steven Finn might be one of the best young acoustic blues guitar players on two legs. His guitar play is inspired by some of the greats, and he does them proud. Finn’s singer/songwriter style is very clean and fresh and well worth listening to. In general I enjoyed Houdini’s Blues but I did have one issue. When it comes to the blues material Finn’s peers are a who’s who of blues guitarists, but on the vocal side Finn just doesn’t seem credible. He has a very pleasant voice, one that is highly enjoyable to listen to, but it’s just not a blues voice. This is perhaps a bit short-sighted on the reviewer’s part, but it made the blues offerings here sound a bit out of synch.

The album opens with Houdini’s Blues (title track) in a plaintive, passive acoustic blues arrangement. The guitar work and composition are top notch, but Finn’s lyric voice just doesn’t sound like that of a blues singer. Finn runs into this same trap on songs such as Dream Song #1 and Talktown, although the latter gets an extra kick of life from some hot harmonica play (also by Finn). The singer/songwriter material works perfectly here. Heroes & Movie Stars is a great example of a song that connects Finn to the listener in classic story teller fashion. Strong Storm Rising is my personal favorite in a song that I could picture getting covered repeatedly in the Folk world. All Come To Reap The Goldrush is right there with Strong Storm Rising for quality of songwriting and performance.

Steven Finn has a great voice, great songwriting skills and performance/presentation style that puts the listener at ease. As an acoustic blues guitar player he would appear to be right there with the best of the class. There is a bit of a believability issue when it comes to the vocals on his more blues oriented material. Finn’s lyric voice is still great but sounds a little out of place on the blues tunes. Either way, Houdini’s Blues is a strong, strong showing. We look forward to hearing more from Finn in the future.

You can learn more about Steven Finn at www.myspace.com/stevenfinn. You can purchase a copy of Houdini’s Blues at www.cdbaby.com/cd/stevenfinn.
Posted by Wildy at 5:10 AM