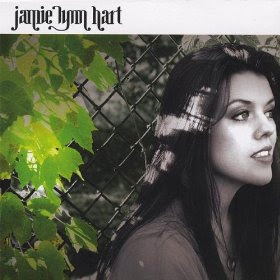 Jamie Lynn Hart is one of the bright new stars in the Boston music scene, captivating crowds with her honey-hued voice. Hart has significant classical vocal training under her belt, but sings with an R&B/soul style that is unmistakably her own. In 2008, Hart released her debut EP, Jamie Lynn Hart, including five of her most popular songs. The Masters candidate in Music will embark on her first national tour in the spring of 2009 upon graduation.

Okay, get it out of your system.... Wow. Hart has an amazing voice. Its dark and heavy with more vibrato than you might be used to in pop music, but Hart will blow you away with her voice. The EP opens with Sassy, a funk-laden R&B tune that will invoke comparisons to Mary J. Blige. This song could be a hit on the radio right now without any changes. From the brash presentation of Sassy we step to a more introspective Hart on Illuminate. Hart's voice still has that heavy/dark quality on the slower material, meaning that ballads may not be her strong point. Hart's best sound is in the belting range. Summoned To Succumb is a ballad with a fine guitar/cello arrangement that allows Hart to let loose a little of the sweetness in her voice. Beautiful Minds has a Cowboy Junkies feel to it, and Hart manages to let go of the heaviness of her voice a bit more here until the chorus when all of that vibrato comes back. Hart closes out the EP with Brittle Nails, a country/pop hybrid that is pleasant but for which Hart's voice is just flat out too heavy for.

I love Jamie Lynn Hart's voice, and it works on some of the songs on her debut EP, but it’s just too much for others. The almost Wagnerian vibrato in her voice is intriguing and different in the pop world but inevitably becomes too much. When trained in classical singing styles it can be very difficult to transition from that sound to a rock voice. Hart writes intelligent and interesting songs and is an amazing performer, but the sound is going to ware thin for some listeners. Luckily, if you check her out on YouTube, it appears that heavy quality doesn’t come across in a live setting. So chock this one up to production, folks. Jamie Lynn Hart is definitely worth checking out.

You can learn more about Jamie Lynn Hart at www.myspace.com/jamielynnheartmusic. You can purchase Jamie Lynn Hart on CD through Amazon.com, or you can download a copy from iTunes.
Posted by Wildy at 5:10 AM