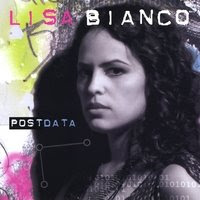 Lisa Bianco comes from the New York City Underground scene, mixing singer/songwriter themes with guitar rock, power pop and experimental rock tendencies. The resulting mix is a delicious mellow rock sound that is as energetic as it is cerebral. On her debut album, Post Data, Bianco tackles the evolving milieu between humanity and the digital world.

Bianco has garnered a reputation as an electric performer, honing her skills on the New York City circuit and recently embarking on an East Coast tour of the US and Canada. The songwriting style on Post Data is strongly reminiscent of The Cranberries. Bianco loves to play with guitar effects as well, and you’ll hear all sorts of interesting sounds throughout Post Data. The apex of the album is the last song, Post Data/We Communicate. Tackling the growing interpersonal disconnect that occurs as become more closely linked in a virtual world, Bianco shows the slippery slope from interconnectivity to isolation. Tumble Like Weeds opens the CD; a powerful song built in a simple arrangement that is a perfect pop setting. The first single from Post Data is Sideways, a musical vignette on tenacity and persistence in difficult times. My personal favorite track here is Catch & Weave. It’s Bianco breaking things down to their most simple, singer/songwriter level. Catch & Weave isn’t the flashiest song on Post Data, but it’s probably the best songwriting of the bunch. Other highlights include Something To Prove, Already Gone and As Good As It Gets.

Lisa Bianco has built an underground reputation, but it turns out she’s so underground she Pop. Post Data is a well-crafted, melodic and intellectual album with a lot of commercial potential. Fans of Chantal Kreviazuk, The Cranberries and Maren Ord will dig this big time.

You can learn more about Lisa Bianco at http://www.lisabianco.com/ or www.myspace.com/lisabianco. You can purchase a copy of Post Data at www.cdbaby.com/cd/lisabianco.
Posted by Wildy at 5:43 AM

This is very cool. Thank you for listening. Cheers!

I met Lisa at Bread and Jam Cafe in Cohoes, NY tonight but did not have time to see the show. After checking out her music on myspace I hope she makes it back to the Capital Region.