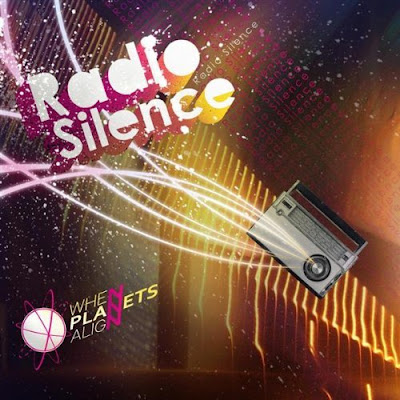 When Planets Align released their debut EP, Radio Silence in 2009 even as they were continuing to evolve as a band. The trio and occasional quartet from Los Angeles has a band member who went to high school with Gwen Stefani. Mark Equinox, Johnny Heaven, Pinkstar and Big Bang Dave hit all the high profile SoCal venues in 2009 and planning to hit the festival circuit in 2010 as they prepare an as-yet unnamed full-length album for release.

Radio Silence opens with “Life's Too Short”, starting with a promising guitar riff that turns into a tepid rock song. Vocalist Pinkstar sounds more than a bit like Geddy Lee on this tune. “Radio Silence” is a bland rock track; innocuous in a formulaic arrangement. When Planets Align picks up the pace on the campy “Hey Gwen!” a mid-tempo dance track that sounds awkwardly put together. “General Santa Anna” mixes Spanish guitar with an almost J-pop angularity for an intriguing listen that's long on pop hooks. When Planets Align pack it in with “California Bride”, a gently subversive Pop number that's musically intriguing but lyrically awkward.

Radio Silence is a somewhat confounding EP. When Planets Align manage to create interesting, even compelling arrangements for their off-beat Pop/Rock tunes, but from a lyrical perspective the EP struggles to connect with listeners. Pinkstar is decent enough on vocals, but Mark Equinox has only a nodding relationship with the melody line he sings. Radio Silence works on some of the micro levels, but on the macro level becomes a bit of a wash.

You can learn more about When Planets Align at http://www.planetsalignmusic.com/ or www.myspace.com/whenplanetsalign. You can download the Radio Silence EP from either Amazon.com or iTunes. Hard copies of the EP exist. You'll have to contact the band through their MySpace page for more information.
Posted by Wildy at 5:00 AM