Review: Red Abbey - On My Way 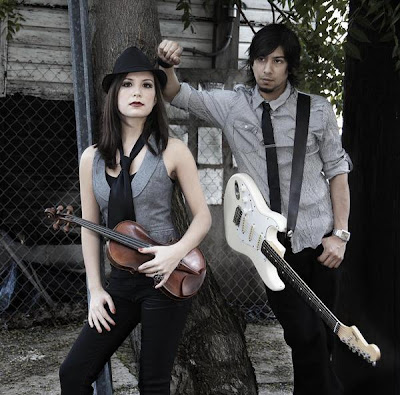 New York City's Red Abbey is made up of Thien-nga Palmer and Trey Ordaz, two multi-cultural multi-instrumentalists who came together after jamming at a party a number of years back. Ordaz has a degree from the Berklee College of Music, and Palmer is classically trained in violin performance, but the eclectic duo make hey with a blend of funk and rock n roll blended around a dynamic stage performance and the electric voice of Thien-nga Palmer. Red Abbey's debut EP, On My Way, features a hungry sound that is full of attitude, sensuality and sx appeal. Produced by Dan McLoughlin (The Pushstars), On My Way puts Red Abbey firmly on the map.

On My Way opens with the empowering "Me"; an unwavering declaration of self that makes some of the best work of violin in a rock song in quite some time. Palmer is part Gwen Stefani and part Kate Bush on a devilishly powerful introduction to the world. "Broken Heart" is a tremendous piece of Pop/Rock songwriting. The chorus is a bit generic, but the verse is powerful and highly memorable. "Red Petals" is an artful monologue on love lost, delivered from the moment of greatest need. The vulnerability in this song is nearly feral in its intensity. Red Abbey unloads a boat load of Funk & Soul on "This Thing", a kiss off song meant to put an end to a bad relationship cycle. It's a tremendous song full of attitude and strength; a must-hear. On My Way closes out with the funky "What Can I Say", a quasi-philosophical song about life circumstances and how they can change without notice. The protagonist here accepts change and rolls with the punches. The song is the weakest one on the EP, yet is a solid tune.

Red Abbey is distinctive. Their stripped-down sound is refreshing, and Thien-nga Palmer's voice is sultry and electric, encompassing a harsh beauty that will keep you on the edge of your seat. Trey Ordaz makes everything work behind the scenes, offering up tight musicianship and co-songwriting that gives Palmer the best settings in which to shine (a sort of Jesse Harris to Palmer's post-punk Norah Jones). On My Way is the sort of debut EP that gets the attention of record execs, radio programmers and new fans. Take some time to check it out Red Abbey while they're still approachable. This duo could rise fast.

You can learn more about Red Abbey at http://www.redabbeyband.com/ or www.myspace.com/redabbeyband. No online purchase points are yet available for On My Way, but if you contact Red Abbey through their MySpace account I'm sure they'll be happy to help you out.