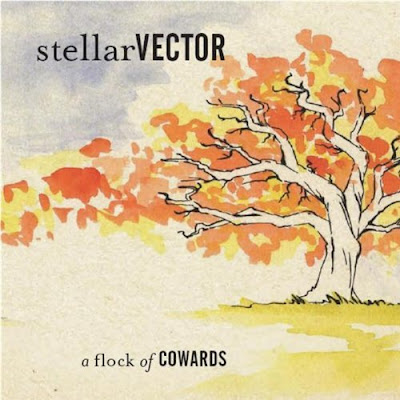 Stellar Vector has had a long and varied path to where they stand as one of the more revered Prog-Electronic bands on the Minneapolis scene. Originally a synth-pop group called {space bar}, Stellar Vector started as a duo of Charles Sadler (vox/keys) and Jonathan Ford (guitar). Over the years classic progressive rock has become more and more of their oeuvre (Gabriel-era Genesis, David Bowie), mixing with Buzzcocks-style Punk. Stellar Vector's debut album, A Flock Of Cowards, finds the band finally comfortable in a sound, but still seeking out the boundaries of where that sound might take them. A Flock Of Cowards drops on April 2, 2010.

A Flock Of Cowards opens with the guitar-driven rock of "Buffalo Jump", a reference to a hunting technique used by the First Nations of North America. The title appears to be more contextual here and ties to an awkward lyrical progression about striking out on your own. "Lacking Self Control" is repetitive and lacking subtlety, while "A Flock Of Cowards" is shows some of the tensile energy of early Police recordings. "February 14th" is a modern rock account of a Valentine's Day planned as a breakup day. The song plays more like prose than poetry; overly wordy for the format without a good flow.

"Titanic Work Effort" details the negative effects of a workaholic lifestyle in vaguely poetic terms. It's among the better compositions on the album, but may drag on a bit too long. Much of the rest of A Flock Of Cowards follows a somewhat non-descript path. The music is listenable but doesn't really stand apart from the crowd. "Closing Notes" is an exception, having a quirky, kinetic energy that demands attention. The closer, "The Not So Hidden Track", could be a knock off on They Might Be Giants' "Particle Man". It's an amusing 30-second morsel but doesn't change the trajectory of the album.

Stellar Vector shows flashes of melodicism on A Flock Of Cowards, but seems to have a hard time matching up energy to intent at times. On the whole the album is a bit flat, although there are lively moments. When the band's quirky side and dry sense of humor come out we see Stellar Vector at their best.

You can learn more about Stellar Vector at http://www.stellarvector.com/ or www.myspace.com/stellarvector. A Flock Of Cowards drops on April 2, 2010, but you can download it now from Amazon.com.
Posted by Wildy at 5:00 AM

Labels: David Bowie, Genesis, Peter Gabriel, The Buzzcocks They Might Be Giants, The Police

This review's got a lot of spelling errors in it.