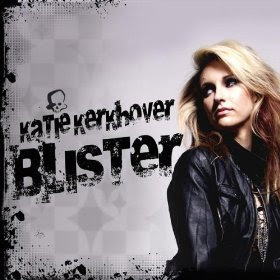 Katie Kerkhover has it all: Big guitars, Rock N Roll attitude, great pop sensibility and a look that will draw in teenage boys helpless in the wake of their hormones. She's Joan Jett, Lita Ford and Britney Spears all rolled into one dynamic package. Kerkhover uses a big voice, a bit of swagger and the angry impetulance of a teenager on her debut album, the digital-only Blister. Blister is featured in Max Rave stores around the country, and a tour with in-store appearances is expected to follow.

Kerkhover opens with Over Me, an angry, rebellious rocker that's a bit overdone. The musicality here is average, but Kerkhover compensates with a loud and brash performance. Down To This is a major step forward, wrapping strong harmonies and an even stronger lead vocal into a big guitar sound. Something Real marks an attempt to be socially conscious that works. It's all about the illusions and delusions we are brought up with that color our thinking for the rest of our lives. Kerkhover calls out everyone in a Punk/Rock anthem inspired by The Runaways. Kerkhover presents a modern version of the liberated woman on Can't Handle Me using big, powerful guitar chords. The song works pretty well, although the vocal here comes off less intelligent and more taunting; almost bratty in tone.

On Habit, Kerkhover takes liberation a step further into wanton sexuality. This one might get radio play but isn't even among the best tracks on the CD. Kerkhover proves her Pop sense on Make You Fall; a big rock tune with highly infectious Pop hooks at its core. Gone Again and The Crystal Method both appear to be targeted as potential singles, but honestly are among the weakest tracks on the disc. A more natural choice for a single would be I'm The Star; the best song on the album and highly infectious to boot. Kerkhover closes with a cover of Joan Jett's Bad Reputation. The cover is almost expected, but Kerkhover established herself as the heir to the Runaway's zeitgeist without the cover.

Katie Kerkhover is making the big cash grab with Blister. It's a strong Hard Rock album written with a pop market in mind. Kerkhover's voice is excellent; she can belt with the best of them, but the sound here is definitely crafted to hit a demographic. That's all well and good, but I suspect that once you get beyond the brash and abrasive persona Kerkhover's putting forward on Blister there's a more subtle and nuanced songwriter waiting to develop. I'll enjoy this disc for what it is, but look forward to hearing what Kerkhover writes and releases once all the initial hoopla dies away and the music itself regains primary station.

You can learn more about Katie Kerkhover at http://www.katieherkhover.com/ or http://www.myspace.com/katieherkhover. You can get downloads of Blister through either iTunes or Amazon.com.
Posted by Wildy at 6:05 AM