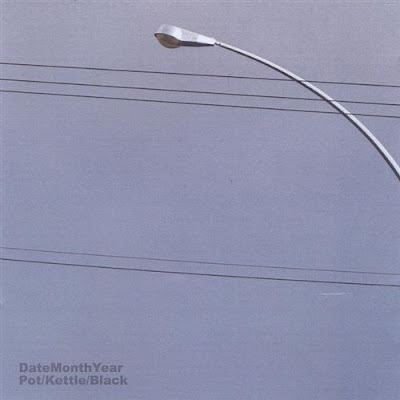 Hamilton, New Zealand digital collective DateMonthYear makes music for the 21st century in modern fashion; using every media and possible outlet increase their exposure. There being no one predominant musical style for DateMonthYear they are impossible to pigeonhole for genre. While no set lineup exists for this anti-band, the usual suspects include Shaye Simpson on vocals, Grant Blackler on guitar and vocals and Trevor Faville on most everything else. In February, 2009, DateMonthYear released their fourth album, Pot/Kettle/Black.

Pot/Kettle/Black opens with the eleven-and-a-half minute musical odyssey 30Something. 30Somthing is comprised of eight minutes of musical wave undulation (quasi-Electronica) followed by a three-and-a-half minute Pop/Alt-Rock song with one lyric line ("One more day at the job") repeated over and over for the final minute of the song. The rock portion of the track is decent aside from the lyrical paucity, but the electronic opening sounds more like a hidden track than a strong opener. Awake! is admonishment of someone with a broken heart to get themselves going, pointing out that the only way to heal is to move forward, even when it seems like a super-human task. This is actually a strong Pop/Rock tune and Simpson is in fine voice. I wouldn't call this a big radio tune but I could easily here it licensed for television.
Traffic and Tightrope both offer up pleasant melodies with generic wraparound light-rock arrangements, as if DateMonthYear chooses ambience over distinct composition. The same philosophy plays out on the organic/electronic instrumental Work, which might almost be termed Ambient-Industrial (Light). Wrong gets a bit bogged down in its own neuroses, but Hometime tries to open things up with an opening full of punk energy that fizzles into a maudlin tune. Prophecy is a decent tune that's just a little too plain to stand out, while Asleep seems to be a regression from the 2nd track. DateMonthYear closes out the album with three relatively mild tracks in Down, p.s.1.2 and p.s.1.4.

DateMonthYear has a decent, marketable sound, but may suffer from a lack of expansive composition that tends to keep them stuck in an ABAB songwriting style. Vocalist Shaye Simpson has a voice that's enjoyable to listen to, but the songwriting is generally fairly average, and the generic pattern arrangements coupled with a general lack of energy can make Pot/Kettle/Black a slow listen at times. There are some very strong moments, but Pot/Kettle/Black never really progresses as an album. DateMonthYear could benefit from taking a few risks musically.

You can learn more about DateMonthYear at http://www.datemonthyear.co.nz/ or www.myspace.com/datemonthyear. You can purchase Pot/Kettle/Black through Amazon.com as either a CD or download. Downloads are also available through iTunes.
Posted by Wildy at 6:06 AM