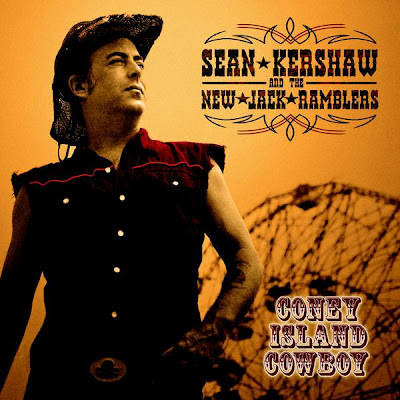 Sean Kershaw And The New Jack Ramblers have been doing their thing in Brooklyn, NY since 2001, playing high-octane, honky-tonk country music with a Rock N Roll attitude. The band has garnered a lot of positive press in the New York market and beyond, going so far to be chosen as a Playgirl pick of the month in July, 2005. The band continued to play live but took a break from writing original material until this year. Going into the studio with producer Rick Miller (Southern Culture On The Skids), Sean Kershaw And The New Jack Ramblers completed their debut album, Coney Island Cowboy, in just three days.

Kershaw comes off sounding like a cross between Big Rude Jake and Luther Wright. The album is very strong instrumentally and the vocals are good. There is a definite difference between the first and second half of the album. Kershaw front-loaded the album with his best material. Old Hollow Tree is an entertaining drinking song in the spirit of classic Honky-tonk style. While I know that apartments in New York City's five boroughs are expensive, this is a highly creative and probably dangerous solution. Piggy In The Middle is great rockabilly in modern vernacular; very danceable Rock N Roll. Coney Island Cowboy scores high points for an accurate description of Coney Island but just doesn't have the energy and chutzpah of some of the other material here. Already Cheatin' is a definite highlight. The song is highly entertaining and humorous and fits stylistically with old-school Honky-Tonk. When The Sheriff Comes To Town could be read as an analogy for the Judeo-Christian concept of the coming of a Messiah. The song uses humor and intelligent lyrics to tell a story without pushing the song into a religious realm.

Little Mr. Train Man is a pure child’s song, and very entertaining at that. Kershaw runs through tunes such as The Trucker & The Tranny, Get Real Gone, Honkytonk Special and Woke Up Dead, all of which are decent but not really up to par with the rest of the album. The band closes with a trucker classic; the Carl Montgomery/Earl Green penned Six Days On The Road, originally made famous by Dave Dudley. Rick Miller sits in and provides some searing guitar work on what turns out to be the best all-around track on the disc.

Sean Kershaw And The New Jack Ramblers have a flair for Honky-Tonk and Rockabilly with a modern attitude and post-modern lyrics. Their album, Coney Island Cowboy is an entertaining listen but is probably not a threat to break into mainstream radio any time soon. This is bar music, pure and simple. Rick Miller does a great job of capturing some of the sound and energy of a live performance on Coney Island Cowboy, and there is some strong songwriting here, but at the end of the day it's music with a limited demographic (at this time). If you're in Brooklyn on a weekend, I highly recommend you seek out Sean Kershaw And The New Jack Ramblers. I suspect the show will be well worth the cover charge.

You can learn more about Sean Kershaw And The New Jack Ramblers at http://www.seankershaw.com/ or www.myspace.com/seankershawandramblers. If you’d like a physical copy of Coney Island Cowboy, message Kershaw through his MySpace page. Digital downloads are available through iTunes.
Posted by Wildy at 5:52 AM