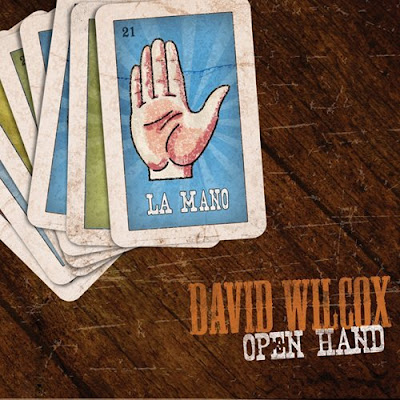 David Wilcox has been crafting introspective Pop songs with a mild spiritual leaning the release of his 1989 debut album, How Did You Find Me Here on A&M Records. Twenty years and fourteen additional albums later, Wilcox hasn't change, still writing in a voice that is true to his life and true to himself. Wilcox released his fifteenth album, Open Hand, in April of 2009. Open Hand was recorded live on analog equipment at Ferndale, California's Sonic Temple in just seven days, lending an air of spontaneity and life to the album that complements Wilcox' style.

Open Hand kicks off with the optimistic Dream Again, a song that recalls better times and encourages people to have the strength to dream of good times again. Dream Again gives a mellow accounting of the decline of US culture and lifestyle from the perspective of the common man, and implies that by dreaming and building new frontiers we can return to a time of greatness. It's an amazing song with real social value. Red Eye is an upbeat, mellow Pop tune about expectations that don't match reality, and the hopeless state sometimes causes us to want to revise history rather than face facts. The song is beautifully crafted and Wilcox's voice is velvet gold. Open Hand is a highly personal song written for a friend with a terminal illness; it's about the fact that sometime we're most alive when confronting death face to face.

In Winter At The Shore, Wilcox creates imagery so powerful you feel as if you could step right into the story. The arrangement is slow and deliberate, allowing Wilcox to take a recitative-like approach. The song is plaintive and beautiful. Modern World reflects the dissatisfaction of the Boomer generation as they grow old in a world that isn't everything they might have hoped in their childhood. The song is well written and smart; it calls out an entire generation for their self-centric attitudes; essentially pointing out that all of the problems we face today originate in the Baby Boom generation. On Vow Of Silence, Wilcox speaks of a love so mature and full it may be hard to imagine for some. This is another bit of amazing songwriting; likely mix tape material for the lovelorn. Beyond Belief delves into Wilcox' religious beliefs somewhat, but serves more as a general reminder to "practice what we preach", and takes to task people in general for arguing over whose faith is better or more. You might say it's something of an ecumenical secular hymn in religious terms. Wilcox closes with River Run Dry, a quiet missive on making the most of the time you have on earth. The song is powerful in its quietude and grace, and perhaps the best overall song on the disc.
David Wilcox writes with a maturity and balance that is rare. Sounding at times a bit like Bruce Cockburn, Wilcox fills a void in the singer/songwriter appetite with insightful and highly melodic songs. Open Hand underscores the meaning of life and living in simple, day-to-day terms. Wilcox is a songwriter at the top of his game. Just sit back and enjoy!

You can learn more about David Wilcox at http://www.davidwilcox.com/ or www.myspace.com/davidwilcoxsite. You can purchase Open Hand through Amazon.com as either a CD or download. Downloads are also available through iTunes.
Posted by Wildy at 6:09 AM