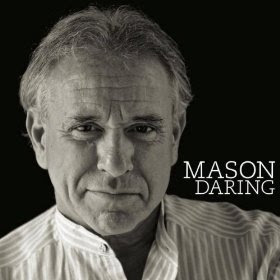 Mason Daring has held a significant place in the music world since his entry in the 1970's. From his early performances at Boston's Bull & Finch (later Cheers) to touring with Jeanie Stahl to having his songs recorded by artists such as Rita Moreno and Ruth Brown, Daring has seen all sides of writing and performing. His score work for the films of John Sayles have gained him additional acclaim, and his Daring/Rounder Records has been a significant contributor as well. After so much success, Mason Daring returns to his roots with his self-titled album, revisiting many of his songs that have been made famous by others and offering up his own interpretations.

Mason Daring opens with perhaps Daring's best known composition. Travelin' Man was made famous by Ricky Nelson and still gets regular airplay on Oldies stations. Daring's voice isn't as pretty as Nelson's, but there's an awkward authenticity here that works well. The song itself is a classic, of course, showing a distinctive ability for both lyrics and melody. Too Much is a love song that's a bit off the beaten track; sounding like a classic. Baby Blue and Funny are both outstanding and presented in Daring's off-center yet intriguing voice. Daring saves his best for last on the album, however, with the final five tracks representing some of his best work.

Dixie Taps is set in a strong Americana arrangement. The soaring theme is theatrical in nature and reverberates in your brain. Only For You was my personal favorite. Written in Dixieland style, it's almost as if Daring transports the listener back in time for this musical experience. People Are Talking, likewise, is an incredible piece of songwriting. The melody here sings itself into your consciousness; the lyrics are intelligent and moving. I Be Blue follows the progress from impotent rage to sadness in a great story song that's something of a surprise stylistically but works as well as any other song on the album. Daring closes out with Soldier's Lullaby, a poignant and touching close to the album that's as apropos for today as when it was written.

Mason Daring is a brilliant composer, and it's interesting to hear him offer his own interpretations of his songs here. Mason Daring is a treat for the ears. While Daring's voice might sound like most anyone on the street, the life he breathes into these songs can only come from a creator.

You can learn more about Mason Daring at http://www.masondaring.com/ or www.myspace.com/mdaring. You can download Mason Daring through Daring’s website using the Nimbit application or from Amazon.com.
Posted by Wildy at 5:10 AM