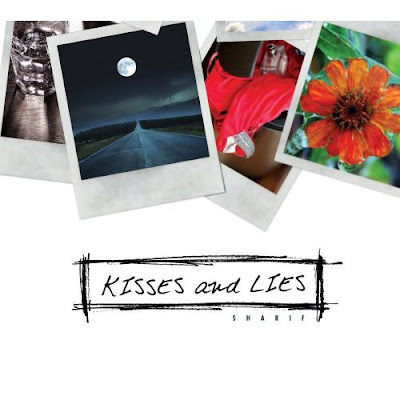 Kisses And Lies opens with Far From You, a vibrant and catchy tune about moving on after a relationship. Sharif has a pleasant voice that soars in this setting. Rhett Miller (The Old 97's) sits in on Dark Side Of The Dawn, a great bit of easy Americana about one way to cope with loss. This one will definitely get your toes tapping, and finds Sharif sounding a bit like Jason Plumb playing with Blue Rodeo. Another Wasted Rose is a brilliant bit of songwriting; it's not your typical country song of heartbreak. Very well written, Another Wasted Rose is full of strong imagery and an absolutely unforgettable chorus. There's nothing flashy here, just amazing songwriting. Worth The Fall represents the realization that even a relationship that ended badly was worth the time he had. The song is melancholy and a bit lost in a mix of sorrow and reverie.

By Your Side casts a mid-tempo devotion of expression; it's the classic "I'll Be There For You" statement in song and leads into Oceans Of Trouble. Oceans Of Trouble finds Sharif still mired in his loss; it's all he can think/write/sing about at this point in the album. Sharif goes off the beaten path a bit with The District Sleeps Alone Tonight, a vaguely off but highly enjoyable song. Sharif celebrates the joy of love on Deeper In Her Arms. The upbeat Americana arrangement has a great sound, border on early Rock N Roll with an R&B backbeat. Sharif seems to struggle a bit for much of the rest of the album, which songs such as Memories Like A Melody, The Price You Pay, Do I Want You Enough and Moment Of Trust having a marginal impression on the public at large. Sharif recovers in time for the last track, however. I Won't Need Your Kisses Anymore is a great closer. The energy that was lost for much of the second half of the album returns in a Blues-flavored, old school Country tune you won't soon forget.

Sharif turns in both great songwriting and performance efforts on Kisses And Liars. The first half of the album is absolutely brilliant while the second half gets mired in itself. It's as if all of the strongest material was placed on the album first and then weaker tracks were added later on. Don't get me wrong, the weaker tracks here don't necessarily equate to a problem, they just don't stand up well against the superior quality songwriting evident on the first half of the album. Either way, Kisses And Liars is worth checking out.

You can learn more about Sharif at http://www.sharifmusic.com/ or www.myspace.com/sharif. You can purchase Kisses And Lies as either a CD or download from CDBaby.com.
Posted by Wildy at 5:05 AM