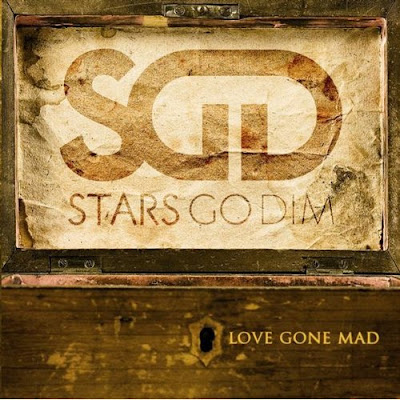 Tulsa, Oklahoma's Stars Go Dim has fully embraced the modern, multimedia approach to music, and it's worked out well for them thus far. From a documentary about how they came to be to a digital novel based in and inspired by their songs, to their exposure on the web, Stars Go Dim have yet to make a bad move. They have been recognized by Tony Cowell (Simon's brother) on his radio show, been nominated for a 2008 Grammy for their contributions to Pillar and won the 2008 Billboard World Song Contest. Their debut album, Love Gone Mad was written in two weeks as a theme just sort of fell together. The future sure looks bright for Stars Go Dim.

Love Gone Mad opens with Get Over It, a highly commercial radio-friendly track built on a big chorus and strong hooks. This is pure radio fodder, with serious commercial potential. Vocalist Chris Cleveland has the voice of a Pop/Rock superstar, and the arrangement and production are slick and smooth as can be. Incredibly follows a similar path; there's a slightly more melancholy feel to the song and yet the lyrics are highly romantic. This is another likely radio hit. Stars Go Dim slow things down a bit for Come Around, a mix tape song if ever there was one. The song opens with just piano and Cleveland on vocals, but quickly opens up into a pure Pop ballad. I don't know if Come Around has quite the "sure thing" feel of the first two tracks, but it's a definite fit for Pop and Adult Contemporary radio.

Love Gone Mad is another ballad that goes from a simple declarative song into a heartfelt mea culpa before turning back to its simpler form in the closing measures. This song it has commercial punch but not on the level of the previous songs; on the other hand it sounds more heartfelt and real. Where Has Our Love Gone tries to mix 1980's Rock sound with a modern feel and succeeds fairly well. In the end this might be the song that launches Stars Go Dim into the next level. Where Has Our Love Gone has the feel of a classic hit, but is new enough sounding to score points in the here and now. While it might not break as hard at commercial radio, the licensing potential for this song is huge. Stars Go Dim get a bit bogged down in pop balladry on Crazy, Letting Go and Hoping For Tomorrow. Each song is decent enough but all sound a little too much like they were designed to score with Pop radio. Walk On is similar, although there appears to be real melodic energy to the song.

Stars Go Dim can play and sing, and seem to have real songwriting talent among them. There's a distinct and stylish Pop sensibility present on Love Gone Mad, although at times there appears to be a tendency to try too hard to fit a Pop mold. These guys are good enough to succeed without being something other than who they are. For most of the album they clearly know that. Love Gone Mad is a highly enjoyable listen.

You can learn more about Stars Go Dim at http://www.starsgodim.com/ or www.myspace.com/starsgodim. You can purchase Love Gone Mad through Amazon.com as either a CD or download. Downloads are also available through iTunes.
Posted by Wildy at 5:00 AM