Review: The Nadas - Ghosts Inside These Halls 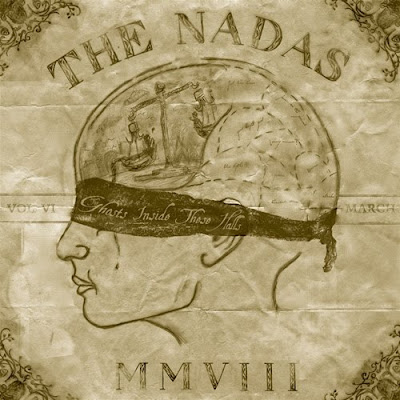 The Nadas - Ghosts Inside These Halls
2008, Authentic Records

Des Moines, Iowa road warriors The Nadas have been bringing their music to the Midwest masses for fifteen years now, touring, most recently, in Meatloaf's old tour bus (which they've affectionately dubbed "Meatloaf"). A modern success story, The Nadas live in relative anonymity in spite of independently selling more than 75,000 CDs through their own label, Authentic Records. The Ghosts Inside These Walls, their sixth album, finds The Nadas striking out on their own, bringing production duties in-house (their two previous albums were produced by Todd and Toby Pipes of Deep Blue Something). The results are sort of a musical mid-life crisis for the band, trying to blend their traditional sound with a maturing maturity in song-writing focus. As crises go, Ghosts Inside These Walls turns out pretty well. But don't let that sense of maturity frighten you; this is still the same band that finished in the final four in Bon Jovi's Have A Nice Day band competition.

Ghosts Inside These Halls opens with Loser; a down-tempo track provides album with its name in the opening line. Loser sounds like a classic teenage underdog song that would fit perfectly in that sort of movie, and it's an intriguing opening. Blue Lights might be the best musical "parking" reference this side of Paradise By The Dashboard Light. While nowhere near as enigmatic as the Meatloaf song, Blue Lights is very well written and tuneful. There's more of a Wallflowers aesthetic than bombast here. Pieces On The Ground is a great piece of Pop/Americana. Strong songwriting, good hooks and poetic lyrics drive this up-tempo number.

Something's Burning is a highly pensive song about self-sabotage in relationships. It's a reminder that all we build can be torn down by passive anger and decay. The story is well-told in song and the arrangement is great! Alaska is my favorite song on the disc; an upbeat country tune about returning to where you come from or where you belong. My favorite performance, on the other hand, is Hammer Down, a big Southern Rock/Country anthem with vibrant guitar work and a real edge. The album closes out with a hidden track that sounds like the band is messing around and vamping in Spanish. The highlight of this exercise is the inclusion of a classic Steve Martin line.

You can learn more about The Nadas at http://www.thenadas.com/ or www.myspace.com/thenadas. You can purchase Ghosts Inside These Halls as either a CD or download from Authentic Records.
Posted by Wildy at 5:44 AM