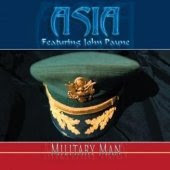 Asia has had more than one formulation over the years, although the sound has never changed all that radically. John Payne stood at the mic from 1992 to 2006 until the original Asia lineup reformed. Being good guys all around, the original Asia lineup agreed to allow Payne to continue to record and tour under the name "Asia featuring John Payne". Asia featuring John Payne released an EP in the UK earlier this year entitled Military Man; that EP will be released in the US on October 27, 2009. No new material is featured, but new recordings of older Asia tracks are included.

Asia was born of the Prog-goes-Pop movement of the 1980's, and debuted with a sound that wasn't entirely like anyone else. Asia was originally a very original and progressive rock band, but the sound stagnated somewhat over the years and by the early 1990's the original lineup began slowly to move on. Payne carries on with a new band, but instead of taking the opportunity to make a sound more his own, Payne has chosen to copy the sound of the original Asia without bringing the energy or originality that fed that sound. Military Man 2009 opens sounding a bit like Europe's The Final Countdown before falling into a mellow musical doppelganger of the original lineup. Payne is decent on vocals and the song certainly has a martial air but no real life. Long Way From Home 2009 has nice harmonies & construction but no read edge. The sound is complacent and comfortable. Neurosaur is a mild Prog synth-based instrumental that has interesting moments but doesn't stick with the listener. Radio edits of Military Man and Long Way Home close out the set.

The Military Man EP just ends up sounding too canned for its own good. It's as if Asia featuring John Payne is simply trying to recapture the sounds of 1982; but they aren't the same band, literally or figuratively. Perhaps Payne would have better luck with original material. Military Man is disappointing not because it's bad (it's listenable), but because it could have been so much more.
Rating: 2.5 Stars (Out of 5)

You can learn more about Asia Featuring John Payne at http://www.asiaworld.com/ or www.myspace.com/asiafeaturingjohnpayne. Military Man will be released in the US on October 27, 2009.
Posted by Wildy at 5:00 AM