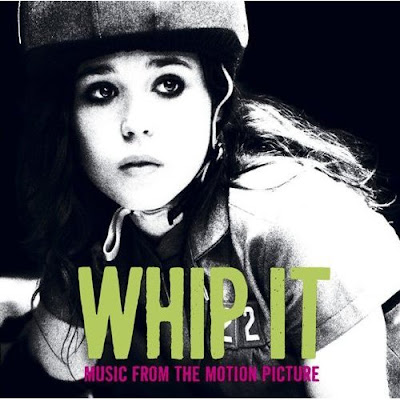 Whip It is a new comedy directed by Drew Barrymore about a small town Texas girl who escapes by becoming a star roller derby player. Yes, it’s as bad as it sounds. Drew Barrymore directs the movie based on the Shauna Cross novel (and screenplay). While the movie has a fairly narrow demographic in mind, the soundtrack is bit more broadminded. Whip It features a plethora of new Indie and Alternative Rock bands, as well as few soundtrack classics.

Tilly & The Wall get things started with Pot Kettle Black, sounding like The Runaways meets the Bratz in a sparse Rock N Roll setting. The first family of New York Punk, The Ramones are up next with Sheena Is A Punk Rocker. Surf and Punk mix here in a hybrid that would inspire an entire generation of musicians. The Raveonettes make mellow waves on Dead Sound, one of the surprise highlights of the album. The dynamic here is repressed, gothic Pop. The song is pretty and yet there's something slight off all at the same time. Jens Lekman does the Cure/Smiths thing on Your Arms Around Me. It's a decent, mildly catchy and sonically melancholy tune that could be a sleeper hit.

Gotye's Learnalilgivinanlovin is catchy, 60's-flavored Dance Rock with strong harmonies and an infectious nature. It might not make the biggest impression on the first listen but will stick with you more than most anything else offered on the album. Dolly Parton's Jolene and .38 Special's Caught Up In You are classics of their respective genres and get recycled for soundtracks every few years After this point things head downhill. Adam Green and Har Mar's cover of the Addrisi Brothers' Never My Love is decent, but there's not much past that's likely to perk the interest of listeners. The Squeak E. Clean & Desert Eagles Remix of The Chordette's classic Lollipop is the low point of the album. While I'm all for interpreting and make a song your own, this remix simply makes a mess of the song.

Whip It is uneven and at times messy, but there are some strong moments along the way. The songs seem to have been chosen more according to someone's personal coolness scale rather than an attempt to craft a particular sound or mood for the movie. The end result is a sometimes enjoyable and sometimes unavoidable mess.

You can learn more about Whip It at http://www.foxsearchlight.com/whipit. You can purchase a copy of Whip It at Amazon.com as either a CD or download.
Posted by Wildy at 5:00 AM

Labels: 38 Special, Dolly Parton, The Cure, The Ramones, The Runaways, The Smiths

Under normal circumstances I would have thought that Ellen Page has a really annoying way about her, but she actually did a great job in this movie; all around Whip It rocked.