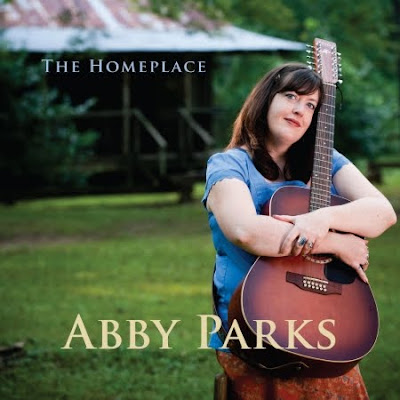 Abby Parks is ready for the next level. The Durham, North Carolina born singer-songwriter is currently based in Alabama, but has traveled all over the world in pursuit of her dream. Fueled by an intense talent for songwriting and a voice full of earthy warmth and beauty, Parks crafts songs in the vein of Shawn Colvin or even Caroline Aiken. Parks' sophomore album, The Homeplace, was recorded at Huntsville, Alabama's Sound Cell Recordings with Doug Jansen Smith (Take 6, Willie Nelson, Phil Collins, Brian McNight), and features an expansion in both imagination and instrumentation over Parks' 2005 debut album, Moving On.

Parks opens with Homeplace; a song about children going to look for money at their old home that their dying father has said was left behind. In the process of searching, the adult children become lost in reverie and forget why they came in the first place. It's about the power of love and memories; a positive song with a positive message. Parks writes masterfully, and her voice puts you in a mindset to listen. End Of A Year talks about all of the personal highs and lows a relationship can go through in a year. The song also expresses Parks' profound faith in God, referring to a lifetime of bad decisions being cured in one moment of Salvation. Wild Dogs is a wonderful story song about the troubles facing those living on the western frontier in early America. This particular story has a sad ending, but is very well told. The melody and Parks' voice are perfect here. In The Observer, Parks discusses the difficulties of dating in a society that is so self-obsessed that personal details are broadcast on the net for people's own self-gratification. Well told, well written and well sung; listeners will find details here that are familiar either from their own lives or from those of someone they know.

Caves is a character piece of sorts, looking through the eyes of someone or something who has been preserved forever inside of a cave. Recollections of the past are mixed with hopelessness for the future based on the entrapment. It's an intriguing song written in the first person that requires some suspension of disbelief but hits on some similar themes to James Taylor's The Frozen Man. The Only One Who Knows is a country tune written from the perspective of a strong woman with a man who seems to fail at everything he tries. The song is well-paced with a quiet intensity. Parks is the consummate story teller here. Lambert Road is a tragic story-song that appears at first to be about the death of a husband and soldier but turns into the death of love and trust. Cowardice is contrasted with strength and dedication in a touching musical painting done in stark contrasts. Parks closes out with He's Risen, a musical celebration of the Christian belief that Jesus rose from the dead after Crucifixion. The song is well written, with an arrangement that includes subtle orchestration and a dramatic sense that calls to mind a Broadway diva rather than a Folk/Pop singer.

Abby Parks mixes secular and religious themes on The Homeplace, blending them with strong songwriting, an earthy voice that is intriguing and comforting and a story-telling style that is appealing and accessible. Where Faith is an issue on The Homeplace, it's simply an honest expression of Parks as she is rather than attempt to proselytize; the honesty and unassuming grace is refreshing. Musically, the album is highly crafted and perfectly presented. Abby Parks is a distinctive talent. If you like pure singer/songwriter and Folk material, then The Homeplace is definitely for you.

You can learn more about Abby Parks at www.myspace.com/abbyparks, or http://www.abbyparks.com/, where you can purchase a copy of The Homeplace.
Posted by Wildy at 5:00 AM