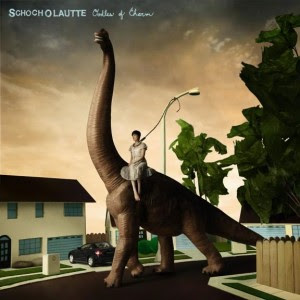 Brooklyn trio Schocholautte came together because of a Craigslist ad in 2007. Michael P. Sincavage (vox/guitar); Kris Randazzo (drums) and Artie Tan (bass) combine a high-energy performing style with sensitivity and an avid Pop sensibility that's a rare combination. Their debut EP, Oodles Of Charm is just the appetizer their fans need while they work on their full length debut CD and madly tour the Northeast US. With the help of producer Dean Baltulonis (Bouncing Souls, The Holdsteady), Schocholautte has created one of the more intriguing debut EPs of 2009.

Oodles Of Charm opens with vibrant Rock N Roll with a punk ethic in the form of Mercedez Benz. It's clear right from the get go that Schocholautte loves to plat around and have fun with the music, although they seem to lose track of where they started from time to time. Spin The Bottle is a vibrant bit of Rock N Roll that's a bit messy about the seams. The songwriting and vocals aren't top notch, but Schocholautte more than makes up for any deficits with exuberant, high energy performances. Haley, Please is something of a mess; starting well but falling into a repetitive trap akin to the emotional circles a pining teenager may go through. Gone is a rough song of loss where once again, exuberance makes up for a lack of songwriting finesse. Swimming Out is catchy but obtuse. Schocholautte shows real pop sensibility but gets a bit lost in their own lyrical constructs. It's an enjoyable, danceable listen but a bit difficult to make real sense out of. Schocholautte closes out with Water On The Coast, the most inventive, original and far-reaching composition on the disc.

Schocholautte is charming in their lack of polish. A Lo-Fi aesthetic mixed with young writing skills and bucket loads of exuberance make for a fun if sometimes exasperating listen. These guys have a finger on strong Pop songwriting, but lyrically leave something to be desired. Oodles Of Charm is a great listen as long as you don't try to make too much out of the words.

You can learn more about Shocholautte at http://www.schocholautte.com/ or www.myspace.com/schocholautte. You can download Oodles Of Charm from iTunes. Physical copies exist, but no on-line outlet was noted.
Posted by Wildy at 5:00 AM