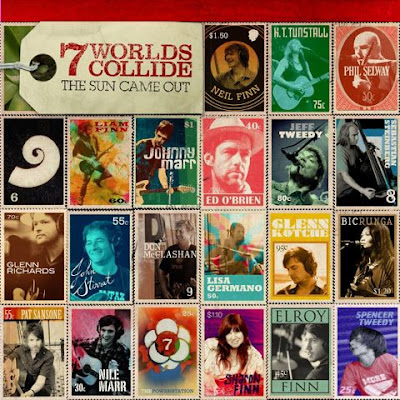 'Tis the season for benefit albums. Oxfam International is the beneficiary of the collective 7 Worlds Collide's release, The Sun Came Out, recently released by Sony Records in Australia, the UK and in North America. 7 Worlds Collide is a loose collaboration between The Finn Family (Tim, Neil, Sharon, Liam and Elroy) and artists such as Jeff Tweedy (Wilco), KT Tunstall, Bic Runga, Phil Selway (Radiohead), Johnny Marr, Don McGlashan, Glenn Richards and others. The Sun Came Out comprises 24 songs across two CD's, mixing the magical and the mundane into a generally enjoyable listening experience.

Highlights abound on The Sun Came Out, starting with Jeff Tweedy on You Never Know. This is what it would sound like if the Beach Boys played Americana music; Great harmonies, a strong melody line and a cynical narrative about each generation's tendency to think they are the last. KT Tunstall and Bic Runga's Black Silk Ribbon is stark and mysterious, as if two miscreant angels were singing together to hold back the night. Don McGlashan gets into heavy socio-religious commentary on Girl, Make Up Your Mind. The song admonishes someone to think for herself, using a series of Judeo-Christian beliefs or stories as examples of things "they" will try to convince her of. What's most funny about the song is that it preaches independent thought while strongly implying his disapproval of the ideas put forth. Phil Selway gets into the action with lead vocals on two songs; The Ties That Bind Us and The Witching Hour. The Ties That Bind is great, nuanced songwriting with an ambling melody that draws you along. His songwriting on The Witching Hour is equally strong and enjoyable, and his voice is a pleasant listen.

Glenn Richards teams up with Johnny Marr and Neil Finn on Duxton Blues. This is one of the quiet surprises on the album. On first listen it's very straightforward and somewhat gentle, but there's a tremendous amount of musical energy being expended beneath the surface here. Richards' voice is affable, and the harmonies and arrangement are nearly magical. My favorite track on the disc is KT Tunstall's Hazel Black. I could listen to this tune on replay all day long. The song and arrangement are great, but Tunstall's voice puts this over the top. Not to be left out, Bic Runga turns in a great vocal performance on Change Of Heart; using her mellow, subtle voice to illuminate the nuance and emotion in the song. Ed O'Brien kicks in with the best pure Rock tune on the album, Long Time Gone, and Glenn Kotchke and Phil Selway channel Bill Bruford on 3 Worlds Collide. The Sun Came Out closes with The Water, a collaboration between Sebastian Steinberg (vocals), Neil Finn, Glenn Kotchke and Johnny Marr. Steinberg has a pleasant voice, and the meandering tune is a great wind down for the album.

These sorts of collections usually walk a tight rope; and most fall inevitably to the net below. The conglomeration of so many talents in support of a good cause generally incurs the stepping on of toes and tension that alters the creative process. To listen to The Sun Came Out, 7 Worlds Collide managed to avoid these pitfalls. There's some up and down in the quality of individual songs, but not unlike you would find on any normal album from a group of talented musicians as those who comprise 7 Worlds Collide. All-in-all it's a great album, and a chance to hear some well-known artists in a slightly different milieu than normal. KT Tunstall and Phil Selway standout from a standout crowd here, but there isn't a bad track out of the twenty-four. If you're looking for some great new music and want to do something good for someone else in the process of acquiring it, then think seriously about 7 Worlds Collide's The Sun Came Out. It's a great listen.

You can learn more about 7 Worlds Collide at http://www.7worldscollide.com/ or www.myspace.com/7worldscollide. You can purchase The Sun Came Out as either a CD or download through Amazon.com.
Posted by Wildy at 5:45 AM