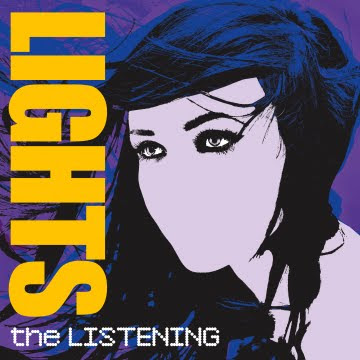 If you lived in a culture that had yet to discover electricity, happening upon an electric light bulb would be a revelatory experience. The discovery of something that transcends darkness is monumental to those who know nothing but. Don't be surprised if the first time you hear Canadian singer/songwriter Lights your reaction is very similar. The 22-year old who has lived all over the world struggled with a lack of consistency until she found it in music. The creative space she built for herself led her to songwriting by her early teens and production not long after. Over time her tastes and interest evolved to a brand of keytar driving electro-pop that's both reminiscent of the 1980's as well as new and fresh. Lights won a 2008 Juno Award (The Canadian Grammy) as Best New Artist after garnering two Top-3 singles on the MuchMusic charts from her self-titled debut EP. Building on that success is The Listening, her follow-up album released this month by Warner Brothers Records.

Lights is not your typical pop princess. She retains creative control of her songs and continues to do her own promotions. Lights built up word of mouth via her on-line presence, from MySpace to her website to her love for World Of Warcraft. Lights appeals equally well to the plastics and the nerds, and pretty much everyone in-between. The Listening opens with Saviour, a trademark where Lights takes an emotionally painful situation and transcends it with divine Pop inspiration. Monotone verses open up into a big pop chorus, although the vocal effects are very much overdone (as they are on much of the album). Drive My Soul is a bit of light electropop soul searching not so much about spirituality but love. River is a great listen, but once again the vocal effects are so involved it's difficult to tell whether it’s Lights singing or a computer simulation of her. Ice is a brilliant bit of radio-ready pop. Don't be surprised if this finds significant presence on popular radio at some point.

The Last On Your Mind sounds as if it were written for a teen comedy or CW prime-time soap opera. Second Go is all about second chances and sounds like something you might hear from the Radio Disney crowd. Lions! is mild, uplifting Pop worth checking out. Pretend, February Air and Face Up are all also worth a listen or two. My favorite moment on the album, however, is when Lights goes acoustic. Her solo piano version of Pretend is the true revelation. Lights doesn't have a powerful voice; it's plaintive and pretty, but there's true vulnerability and heart that come across once all of the electronic effects are stripped away. There's no doubt at any point on the album that Lights is a talented keyboardist, and she can write, but it's at this most quiet moment that Lights shines brightest.

The Listening elevates the game of Pop music with well-constructed, intelligent and heartfelt songs that will play very well to Pop radio without sacrificing quality or content. Lights hearkens back to a time when Pop artists strove to create great music rather than just tossing off the next mass-produced song form to be consumed by the masses. The Listening is a very promising sophomore effort, built from the cornerstone of her self-titled EP. Expect Lights to shine bright.
Rating: 3.5 Stars (Out of 5)

You can learn more about Lights at http://www.iamlights.com/, where you can order a copy of The Listening in her shop. You can download The Listening from iTunes in either a standard version or a version with bonus tracks!
Posted by Wildy at 5:10 AM