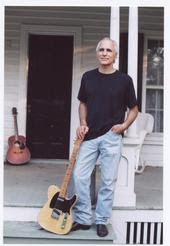 Orchard Park, NY based singer/songwriter Doug Yeomans looks unassuming if you see him on the street, but when he straps on a guitar he comes alive in a fashion you'd not suspect otherwise. Yeomans plays everything from Country to Rock N Roll; from Blues to Jazz and from Bluegrass to fingerstyle. His style is distinctive in a day and age when speed and volume are prized over skill, but the spirit of Chet Atkins infuses Yeoman's playing style like a six-string guardian angel. Yeomans won the North American Rock Guitar Competition in 2001, as well as a Buffalo Music Award as Best Blues Guitarist in the same year. Yeomans previously was voted Best Country Lead Guitarist in the 1990 edition of the Buffalo Music Awards. With a pleasant voice and hard-to-match guitar chops, Yeomans is an affable entertainer who can cover the entire musical spectrum live. A few years back Yeomans noted the lack of traditional Christmas albums on the market and decided to do something about it. The result was Christmas Time's A-Comin', a sweet and sentimental holiday album that recalls the classic Christmas albums of the 1950's and 1960's, with a bit of Mitch Miller thrown in for good measure.

Yeomans covers the Christmas standards of the Pop era of Christmas Time's A-Comin', with exquisite guitar work, strong arrangements and a likeable voice you'll find yourself drawn to sing along with. A children's chorus assists on and off throughout the album. Songs such as Here Comes Santa Claus, Jingle Bells, Santa Claus Is Comin' To Town and Frosty The Snowman are reverent to classic versions you hear on the radio at Christmastime. All I Want For Christmas Is My Two Front Teeth is entertaining, and there's a hint of mischievous glee in Yeoman's voice in one of the most inspired performances on the album. Here Comes Suzi Snowflake was a new time to me, and a pleasant surprise. Yeomans sticks close to the version made famous by Rosemary Clooney. Jingle Bell Rock is another highlight, not presenting anything new original in the song but very well done all the same. Yeomans closes out with Up On The Housetop and We Wish You A Merry Christmas in two very straightforward renditions, the latter of which is assisted by the children's chorus.

Christmas Time's A-Comin' isn't flashy or fancy; it's a back-to-basics Christmas album that avoids the flash of modern Christmas compilations. If you long for a time when Christmas was simpler, families were close together and everyone sang along with the carols on the radio or record player, then this album is for you. Yeomans doesn't aim to make these songs his own; he's sharing them with anyone who will listen in unadorned, classic arrangements that speak of simpler times. Christmas Time's A-Comin' is a strong offering and a must for the holidays.

You can learn more about Doug Yeomans at http://www.dougyeomans.com/. Christmas Time’s A-Comin’ is not formally on-sale on the internet, but if you contact Yeomans here I’m sure he’ll be happy to sell you a copy.
Posted by Wildy at 5:41 AM