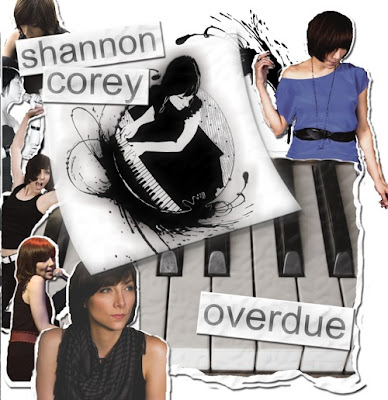 Born in New York City and raised in Providence, Rhode Island, Shannon Corey was introduced to music at a young age. Classical piano lessons started at three years and continued into high school when Corey began writing her own material. Corey pursued a degree in musical theater in New York City before tossing herself into the local music scene there. In 2007 she released her debut album, unsaid. That material got her noticed by the right folks, as some of her songs were recently featured on an episode of MTV's The Real World: Cancun. Corey spent two years on the road promoting unsaid, but now returns with a brand new EP entitled Overdue. Overdue finds Corey writing from a deeper well than just two years ago, and her voice has evolved in that time. The result is a collection of five complex and emotive Piano-Rock tunes.

Corey opens up with Overdue, a song about avoiding the obvious in a relationship that's stalled out. The narrator here recognizes the problems that exist but is avoiding them. Corey's musical theater background shows through some here, particularly in the quieter moments of the song. Let Me Out is built on a piano part that's strongly influenced by Tori Amos. Let Me Out picks up where Overdue left off lyrically, dealing with another relationship where distance has come between the pair. Sunday Morning is a romantic tune about one of those perfect moments that couples share at times. This is a non-traditional mix-tape tune and is very well written. Corey goes from 88 strings to 6 for The Guitar Song, a mournful tune at the realization that a relationship isn't working out. If any of you have ever heard or seen the musical The Last 5 Years, you'll be able to imagine Sherrie Renee Scott singing this tune in her role there. Corey closes out with a radio edit of Overdue that cuts out about 45 seconds of the original.

Shannon Corey has a full, rich alto voice that's highly emotive and warm. Her compositional style is complex, playing with time signatures and chord constructions within the realm of Pop/Rock tunes that walk a fine line between esoteric and Pop oriented. Shannon Corey is a great listen and very much worthy of your time and attention. If there's anything Overdue here it's accolades.

You can learn more about Shannon Corey at http://www.shannoncorey.com/ or www.myspace.com/shannoncorey. You can purchase Overdue directly from Shannon Corey through a listing on the “news” section of her website. The EP does not appear to be in wide release yet.
Posted by Wildy at 5:20 AM