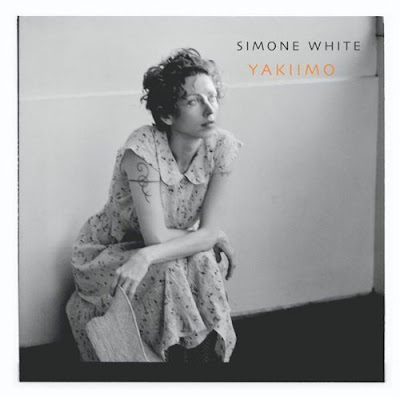 Simone White was practically born into performing. Her mother a folksinger, her father a sculptor and her grandmother a burlesque performer, the limelight is in White’s genes. White was writing songs a Capella in her head for some time before she taught herself to play guitar. In 2000, White moved from London to New York City and found the stage to begin performing her songs. In 2004 she went to Nashville to record with Mark Nevers (Calexico, Lambchop, Will Oldham) and walked away with a record deal with the UK’s Honest Jon Records. She’s gone on to play major stages all over the world, and even had one tune, The Beep Beep Song, featured in a commercial for Audi. Her latest album, Yakiimo is already out in the UK, and sees a US release date of November 10, 2009.

Simone White is eclectic. Her voice is so soft and pure you'd she's become lost in the wash of instrumentation, but White's sound is so distinctive that she stands out. There's a razor's edge that lies beneath the surface of that soft voice that's full of wit and intelligence and not a little pluck. All of these qualities come dancing through on Yakiimo's opening track, Bunny In A Bunny Suit. The song is all about someone who has trying to change herself for others for so long she doesn't even know who she is anymore. Bunny In A Bunny Suit is compelling, stripped down as it is into bare instrumentation. The honest and vulnerability that emanates from White are made all the more believable by her uncharacteristic vocal sound. On Candy Bar Killer, White tells the tale of a free spirit with a dark side. It's a mellow and serene song with a melody that dances for you. Baby Lie Down With Me is a mellow yet enthusiastically happy love song. Intelligent and sweet, White displays just how good of a songwriter she is right here.

Yakiimo are roasted sweet potatoes sold by street vendors in cities in Japan and elsewhere. The song is a lament of their effect as harbingers of winter. Simone White has an uncanny ability to unnerve listeners at times, using her sweet and out-of-the-ordinary voice to deliver messages with the impact of left hooks at times. A Girl You Never Met shows this ability grandly. It's a mellow yet starkly worded breakup song. The narrator takes on all the responsibility and then turns and tells him/her how happy she was before (s)he came along. The most entertaining song on the CD is Train Song, a fun listen you won't be able to get out of your head. Your Stop sounds like a song of reverie over a lost love, or it might have a darker side in light of the next track, Olivia. Olivia is a vaguely creepy song of obsession. The tone and tenor here and gentle, but the narrator has been following/studying the object of her affection for some time. The story is well told in song with a great melody and arrangement. Let The Cold Wind Blow is another free spirit song, written about a soul who's perfect in her imperfection. White closes out with a cover of St. Louis Blues, a stark tale of adultery done in a wonderful acoustic blues setting. White's voice is the perfect foil for the guitar in this song.

Simone White gets your attention quickly with a sound that's a bit unlike most anyone else in Pop/Rock/Folk music. Yakiimo continues to garner White attention, a trend likely to grow with the November 10, 2009 release of the album in the US. This is one release not to skip out on. It's always possible you won't like it, but it's more likely that you'll be kicking yourself later on for not checking out Simone White.
Rating: 3.5 Stars (Out of 5)

You can learn more about Simone White at http://www.simonewhite.com/ or www.myspace.com/simonewhite. Yakiimo drops in the US on November 10, 2009. Expect wide availability.
Posted by Wildy at 5:10 AM