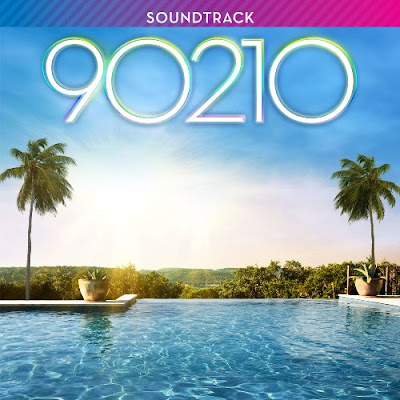 Like many fans of the original 90210 series, I was skeptical of the CW's revamped version of the show, but 90210 has become the CW's most popular show. I haven't watched it and so can't comment on the show itself, but it certainly does well with the prized 18-34 year old demographic. In the tradition of shows such as Gossip Girl and NCIS, 90210 have become very music focused, featuring an artist each week in the show and promoting the artist and soundtrack at the end of each show. CBS Records will release Soundtrack: 90210 on October 13, 2009, featuring artists that will be featured on the upcoming season of the show.

The album opens with Many Shades Of Black by Adele And The Ranconteurs; a catchy, old-school R&B/Motown style tune. Adele has a great voice and the intense guitar work is a definite plus. N.E.R.D. (featuring Santigold) is up next with Soldier, in a song that sounds like The Donnas and Devo jamming while DJ Jazzy Jeff serves up rhymes. Jet's One Hipster One Bullet takes the ironic route through hipster-style Punk in what turns out to be one of the true highlights of the soundtrack. Mutemath, OK Go and The All-American Rejects turn in mediocre pop tracks before Anberlin kicks in with A Perfect Torniquet. I wasn't overly impressed with the song, but the voice is a must-hear.

Will Dailey gets things going again with You're So Cold; an upbeat tune with crunchy guitars. The verses are a bit on the tame side but the chorus is as catchy as anything on the radio. The Red Jumpsuit Apparatus turns in what might be the best Pop/Rock single with Love Seat, and Parachute isn't far behind with One Small Step. New York City singer/songwriter Sarah Solovay makes her debut on the soundtrack with Hearts Collide. Solovay has a lot of buzz surrounding her, and Hearts Collide is a solid track. She might be someone we need to hear more of. But there's no question about the next artist. Wildy's World June - 2009 Artist Of The Month Darrelle London contributes Understand from her wonderful album, Edible Word Parade. It's far and away the best song on the disc and may go a long way toward turning London into an internationally known artist. The soundtrack closes out with a remix of the original 90210 theme song.

Like most television soundtracks you get some great songs and some mediocre songs on Soundtrack 90210. Executive Producer Rebecca Sinclair and music supervisor Scott Vener have put together a solid, consistent sound for the upcoming season, mixing some big names and relative unknowns to complete the sound tableau. Darrelle London, Adele And The Raconteurs and Will Dailey are definite highlights, and Sarah Solovay bears further attention. The rest is decent enough to drive album sales as opposed to single sales. To push that point, CBS Records is licensing digital sales of the full album only (no singles). Soundtrack: 90210 is well done.

You can learn more about 90210 from The CW’s website. Soundtrack 90210 drops on October 13, 2009. You can pre-order copies from Amazon.com. Expect widespread availability in both real and virtual formats.
Posted by Wildy at 5:00 AM